A new nanoparticle material conducts electricity even when stretched to twice its original length. 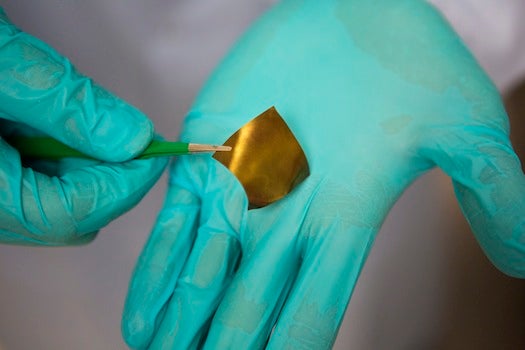 A team of scientists at the University of Michigan has discovered that when stretched to their limits, gold nanoparticles embedded into elastic material self-assemble into conductive pathways. The finding has applications for flexible electronics and gentle medical devices.

For their experiment, lead researchers Nicholas Kotov and Yoonseob Kim applied gold nanoparticles to a sample of polyurethane. Observing the effects with an electron microscope, the team slowly began to stretch the material. The nanoparticles responded to the tension by rearranging themselves into chains.

Kotov and Kim tested two versions of the material. The first involved alternating layers of polyurethane and nanoparticles, which can conduct 11,000 Siemens per centimeter (S/cm) at its original size. After being stretched to more than twice its length, the material still managed to conduct at 2,400 S/cm.

The second version of the material was a filtered solution with a natural conductance of 1,800 S/cm. At 5.8 times its original length, it could conduct 35 S/cm.

Nanoparticles Before and After

Capitalizing on this characteristic behavior of nanoparticles to organize into chains could lead to advancements in flexible consumer electronics, from cell phones to prosthetic limbs.

Kim and Kotov are particularly interested in the potential application for brain implants. They view their highly resilient conductors as electrodes. Rigid electrodes within the brain create scar tissue and damage cells. Kim and Kotov say their discovery would be as pliable as the surrounding tissue, alleviating effects of diseases such as depression, Alzheimer’s and Parkinson’s.

Listen to Kim and Kotov describe their discovery in the video below.