New Tactile Sensor Is Lighter Than A Feather

This device could lead to advances in wearable technology, embedded medical sensors, flexible electronics, and more.

Researchers at the Someya-Sekitani Lab in Japan have engineered tactile sensors that can be bent, twisted, crumpled, submerged in liquid, stretched, and more–and they’re lighter than a feather. Tactile sensors pick up on touch, force, or pressure–think of the way your car responds when you step on the brake, or (a more complex version) your touchscreen phone–but most existing sensors are silicon-based and therefore bulky. The latest innovation could lead to better and cheaper medical instruments and new health monitoring systems. It could also, eventually, advance consumer electronics, displays, and robotics, the researchers say.

The paper was published in Nature, and the researchers are from University of Tokyo, Johannes Kepler University, and University of Texas at Dallas. Their tactile sensor is made of organic transistors, which use a carbon-based semiconductor as well as an aluminum oxide and self-assembled monolayer dielectric. Jonathan Reeder, a University of Tokyo researcher on the project, explains that the electroplated aluminum oxide dielectric, which measures just under 20 nanometers, was one of the major accomplishments that allowed them to get the complete sensor so thin.

The transistors are deposited onto a special foil with a very rough surface. The foil is five times thinner than saran wrap, and even more compliant: its rough texture allows the circuitry to remain very secure in the “nanotized grooves and valleys,” Reeder says, and allows the product to adhere to almost any surface. 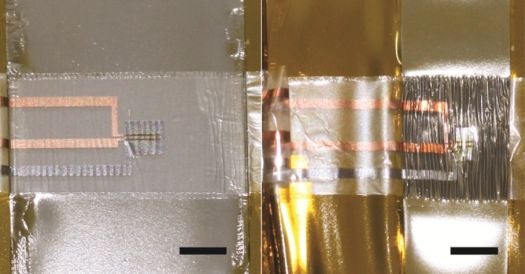 Compression Of The Sensor

Many researchers are focusing on flexible electronics, but the ones coming out of Someya-Sekitani Lab are the thinnest and most flexible circuits to date, the researchers say. (They have aptly nicknamed their work “imperceptible electronics.”) The sensors can conform to almost any 3-D shape. They’re also resilient, the research team says: the sensors maintain functionality up to 170 degrees C (though beyond 100 degrees C their efficiency gradually tapers off); they’re nearly unaffected when immersed in saline solutions; and they can be crumpled up, flattened back out, and even placed on rubber and stretched out–none of which drastically impacts performance.

The researchers envision several potential applications. In a medical setting, you could place the sensors on skin to monitor vital signs like temperature and heart rate. Eventually you could even place them inside the body on muscles or organs for either monitoring purposes or electrical stimulation (of muscles along the heart, for example). In technology, Reeder says the most promising applications are in wearable electronics. Let your imagination run wild for a moment: how cool would it be to have an imperceptible touch control panel on your sleeve for your phone or music player? 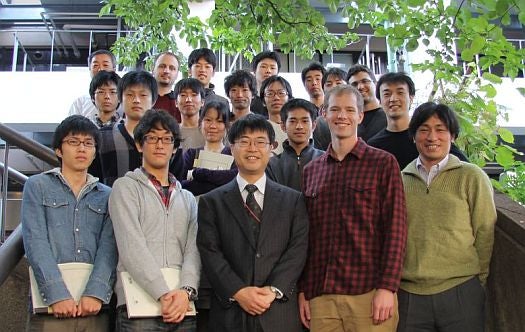 This story was updated on July 28, 2013 to ensure that the exact technical details that accounted the sensor’s thinness were clear and accurate, and to reflect Reeder’s current affiliation to University of Tokyo.