FYI: If A Mosquito Bites Me After I’ve Had A Beer, Can It Get Drunk? 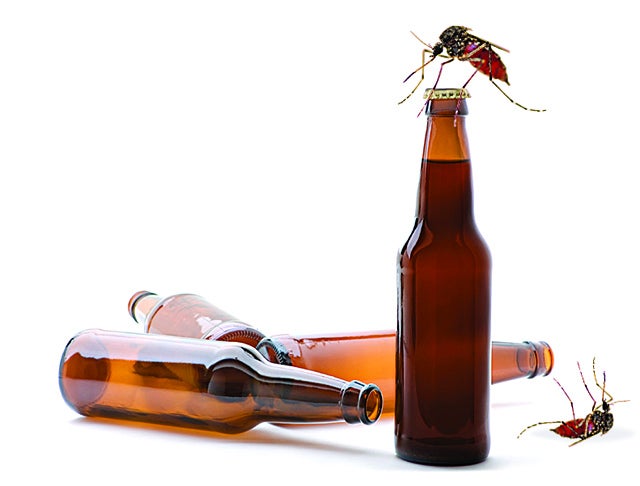 Shockingly, no major studies have been conducted on this topic. “The implications are, however, profound,” says Michael Raupp, an entomologist at the University of Maryland. “Reckless flying, passing out in frosty beer mugs, hitting on crane flies instead of mosquito babes. Frightening!” Fortunately, enough related research exists to make an educated guess.

First, does alcohol affect a mosquito’s simple nervous system the way it does creatures with complex brains, such as dogs or Mickey Rourke? In labs, honeybees fly upside-down after alcohol exposure, and inebriated fruit flies have trouble staying upright and fare poorly on learning tests. This suggests that mosquitoes can get tipsy.

Now, how much alcohol does it take to get them schnockered? Scientists routinely puff ethanol vapors at insects and measure their sensitivity with devices called inebriometers. Bugs are no lightweights, often withstanding vapor concentrations of 60 percent alcohol, far more than what’s in our blood after a couple beers. “Someone who’s had 10 drinks might have a blood alcohol content of 0.2 percent,” says entomologist Coby Schal of North Carolina State University. To a mosquito, a blood meal that contains 0.2 percent alcohol is like drinking a beer diluted 25-fold.

Skeeters might have developed this Ruthian ability to hold their liquor through diet. They also feed on fermenting fruit and plants, which contain at least 1 percent alcohol and might have boosted their tolerance. And in a mosquito, alcohol (and any fluid other than blood) is diverted to a “holding pouch,” where enzymes break it down before it hits the nervous system.

Before you try to drink a mosquito under the table, heed this warning from Michael Reiskind, an entomologist at Oklahoma State University: The blood alcohol levels required to do so would almost certainly kill you as well.

This article originally appeared in the August 2009 issue of Popular Science_ magazine._