Cthulhu Lives In The Gut Of A Termite

As well as in the malevolent deeps 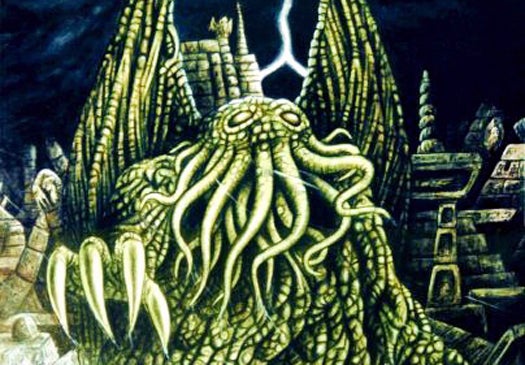 Scientists have been naming species after famous people for a long time. For example, Thomas Jefferson has an extinct giant ground sloth named after him. Mark Knopfler rates a dinosaur. Frank Zappa has multiple animals sharing his namesake, including a spider, a jellyfish and a mudskipper.

Now joining those hallowed ranks is one of the Great Old Ones. Scientists at the University of British Columbia and the University of Florida bequeathed two new genera of symbiotic protists their own dread names: Cthulhu and Cthylla.

The protists, not surprisingly, have a lot of tentacles. (Or, well, they have tentacle-like appendages. In fact, if they didn’t have tentacle-like appendages, I would have been writing this column berating the researchers for their oversight). But, as the researchers say in the abstract to their paper, published in PLOS One: “Both genera have […] an anterior bundle flagella (and likely a single posterior flagellum) that emerge slightly subanteriorly and have a distinctive beat pattern. Cthulhu is relatively large and has a distinctive bundle of over 20 flagella whereas Cthylla is smaller, has only 5 anterior flagella.”

The critters live inside termite guts and help the termites digest the cellulose in wood. I had no idea that R’lyeh was situated in the body cavity of an insect, rather than at the bottom of the South Pacific.

The Lovecraftian purists out there are probably looking at the second genus and muttering “bullsh*t” to themselves–Cthylla (apparently Cthulhu’s youngest progeny) was not created by H.P. Lovecraft. She was invented in 1975 by writer Brian Lumley. I’m not going to get into a nerd-rage fueled throwdown over the nomenclature and rightness of using a latter-day addition to the mythos in the same paper as the hallowed original. I’m just going to use this as an excuse to bust out my copy of At The Mountains of Madness and call in sick tomorrow for work.