Their Big Eyes May Have Caused Neanderthals’ Demise

The species may have gone extinct because their eyes demanded too many neural resources. 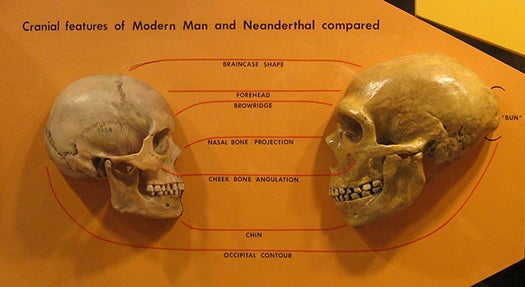 A comparison of skull features of an anatomically modern human and a Neanderthal. Wikipedia
SHARE

Anyone stuck with glasses knows the envy of those with killer eyesight. But visual acuity apparently came at a price, at least for Neanderthals. According to a paper published in Proceedings of the Royal Society B this week, Neanderthals’ visual acuity in the low-light conditions of northern Europe — much higher than that of Homo sapiens — came at the cost of other cognitive skills, such as extended social networks and innovation maintenance.

Researchers at Oxford University compared the sizes of the orbital sockets (the holes in the skull where eyeballs go) to the size of the visual cortex (the part of the brain tasked with interpreting visual information) of five diurnal primate species: Humans, Rhesus macaques, marmosets, squirrel monkeys and brown-mantled tamarins. The results were clear: the size (volume) the visual cortex in each of these species is proportional to the size of the orbital sockets (and thus, the scientists inferred, the eyeballs themselves). The scientists then measured the orbital sockets of a number of Neanderthal skulls and of modern humans alive at the same time as the Neanderthals, and deduced what the volume of the visual cortex in those individuals would have been.

The researchers found that Neanderthals that lived 25-75K years ago had a much higher proportion of their brains dedicated to visual processing, even when compared with anatomically modern humans living during the same time period. This specialization of their brains, the scientists propose, mean that less neural tissue was left over for higher-order reasoning, problem-solving and creating elaborate social networks. This would limit the Neanderthals’ abilities to, for example, trade for resources not endemic to their local habitat, or in times of local scarcity. Additionally, the scientists claim, Neanderthals’ ability to develop or learn new technologies could have suffered due to their brains’ specialization on visual acuity.

The researchers sum up their findings thusly:

Whereas [anatomically modern humans] appear to have concentrated neural investment in social adaptations to solve ecological problems, Neanderthals seem to have adopted an alternative strategy that involved enhanced vision coupled with retention of the physical robusticity of H. heidelbergensis, but not superior social cognition. […] While the physical response to high latitude conditions adopted by Neanderthals may have been very effective at first, the social response developed by AMHs seems to have eventually won out in the face of the climatic instability that characterized high-latitude Eurasia at this time.