A Map Of The World, According To Wikipedia Geotags [Infographic]

This eye-popping interactive map lets you explore the world's collection of digital knowledge one place at a time. 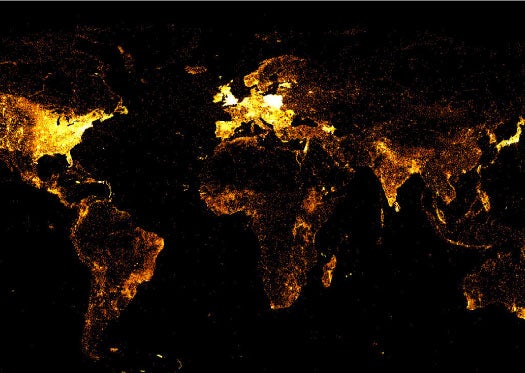 The English version of Wikipedia of has more than four million articles, or 2.5 billion words—50 times the number of words in the next-largest English encyclopedia, the Encyclopedia Brittanica, according to Wikipedia. And in all 271 languages combined, the online encyclopedia holds some 23.6 million entries.

Many of those articles are about places and people and events in human history, and some—at least four million—are tagged with the geographical coordinates of those places, people and events. Now, thanks to this awesome interactive map, you can explore the world’s collection of digital knowledge one place at a time.

Several patterns jump out immediately when you load the English Wikipedia map. Some have obvious explanations. There are bright spots in many big cities. The area around Chicago is outlined in a near-perfect grid; from there, dotted lines follow the branching westward paths of interstate highways, and the towns built along them.

But the patterns also raise questions: Why, on a global scale, do the entries cluster the way they do? (The map reminded us of a world map of a electrification. Click here to see a comparison.) And what are the little points in the middle of the ocean about? (To find out, you can click on them for a link to the corresponding Wikipedia article.)

The interactive map allows you to plot Wikipedia posts in 12 languages, and the non-English language maps are at least as intriguing as the English one. One particularly perplexing element is the map of U.S.-geotagged articles in Catalan: 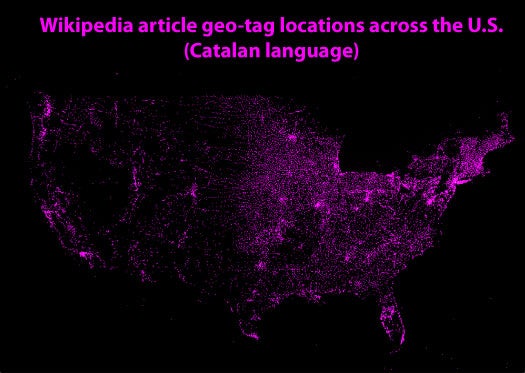 It appears that the people of Catalonia have catalogued quite a bit of the contiguous 48 states. But not all of it–something’s missing. For comparison, here’s the U.S.-geotagged map of English articles: 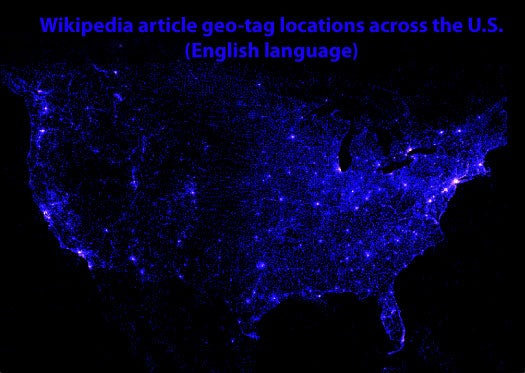 The dots get a little sparse around Nevada but, as a former Michigander, I’m more trouble by the utter exclusion of the mitten state. Such thorough coverage of Ohio—Ohio!—and then, north of that, nothing. Why have the Catalan people missed Michigan, the great Great Lakes state?

If you have an answer, please share it with us. Let us know what else you find out, too!