Revisiting Britain’s Biggest Hoax: Who Faked The Bones Of The Piltdown Man?

One hundred years ago today, scientists hailed the discovery of our earliest ancestor. The bones turned out to be a fraud. But who planted them, and why? 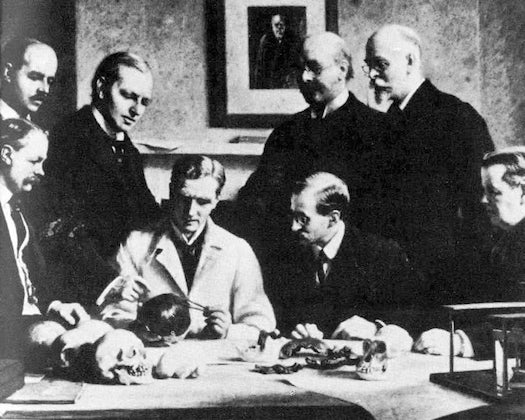 On December 18, 1912, Charles Dawson told The Geological Society of London that a workman had uncovered the remains of one of the earliest humans in a gravel pit in Piltdown, England. The skull fragments and lower jaw bone of the “Piltdown Man” showed that it had a brain two-thirds the size of a modern human’s and a jaw remarkably similar to that of a young chimpanzee.

The Piltdown Man became a starring figure in the human evolutionary tree over the next 40 years. (Popular Science even published a feature in 1931 about the “man-ape.”) But the discovery was actually an incredibly successful hoax: In 1953, chemical testing and microscopic analysis revealed that the bone fragments had been filed down and stained with an iron solution and chromic acid to look more ancient. The Piltdown Man was actually a mix of medieval human skull, orangutan, and chimpanzee.

Exactly a century after Dawson presented his findings, The Geological Society is meeting again to discuss the bones. This time, scientists will try to figure out who perpetrated the UK’s biggest scientific fraud. Dawson is of course the main suspect, but others are under suspicion as well. Researchers at London’s Natural History Museum are using isotopic analysis to determine the sources of the bone fragments, which might have been stolen from an Egyptology collection.

In April 1956, Popular Science published the story of how the hoax was finally revealed by Joseph Weiner, a scientist-turned-detective who felt that something wasn’t quite right about the Piltdown Man.

Home in Oxford that night, in the small hours, Weiner once more revolved in his mind everything that made Piltdown such an impossible misfit. Above all, those “human” teeth in an apish jaw, worn flat as if by a file… A thought struck him like a blow: Could they have been filed flat? He recalled Sherlock Holmes’ words: “When you have eliminated the impossible, whatever remains, however improbable, must be the truth.”

Read the full story in our April 1956 issue.