A Drug That Removes Bad Memories While You Sleep 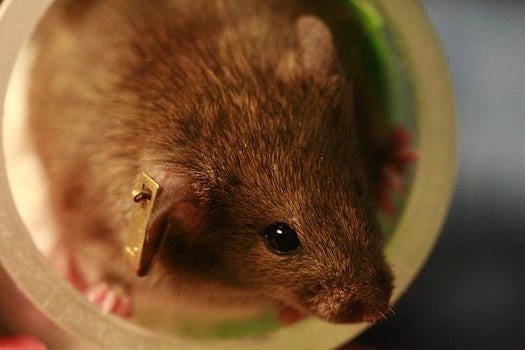 Memory-erasure technology is finally starting to follow Eternal Sunshine canon. In the latest breakthrough, Stanford University researchers announced at the Society for Neuroscience meeting that they are manipulating fearful rat memories. Like the University of Puerto Rico study involving injections that cause rats to forget fears, this research is chemical-based, but the magic happens while the rats sleep. The team at Stanford hopes that sleep-based therapies will expand options for treating Post-Traumatic Stress Disorder.

First, researchers conditioned mice to fear the scent of jasmine by administering a shock every time the mice sniffed the scent. The mice showed the characteristic sign of fear the next day when the scent was present–they froze up anticipating the shock. One group of mice got the conventional treatment of extinction therapy– repeated exposure to to the scent without the shock. The fear dissipated, but returned when they were placed in different environments.

The experimental group received a drug treatment to block the protein synthesis of the basolateral amygdala, the part of the brain that we think stores fearful memories as they went to sleep, when they once again sniffed the jasmine scent. When they woke up, they had diminished fear even when they left the cage where they initially learned the fear. The results show that with the administration of the drug, fearful memories are less likely to resurface after therapy.