DNA Inside Cells Can Serve As Rewritable Data Storage

DNA is the blueprint for life, and now it can serve as a computer to monitor life’s processes. Bioengineers transformed... 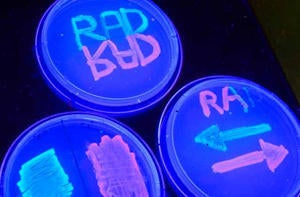 DNA is the blueprint for life, and now it can serve as a computer to monitor life’s processes. Bioengineers transformed DNA into a one-bit memory system that can record, store and erase data within living cells. A future DNA memory device could be used to track cell division and differentiation in cancer patients, perhaps, or to monitor what happens as cells get sick or age.

We’ve seen plenty of body-monitoring computer systems, from chips that can swim through the bloodstream to nanowires that can tap the heart or other muscle. But so far, these systems are limited to a few processes. This system could work like rewritable memory in your computer, recording and erasing information again and again.

The system flips DNA sequences back and forth between two states, basically the genetic equivalent of a binary switch. One DNA orientation equates to “one,” and the other equates to “zero.” The process uses an enzyme taken from bacteriophages to cut and recombine the DNA. The recombinase enzyme moves to a particular swath of DNA and flips it around so its base pairs basically read backward, and a second signal flips it back.

Stanford researchers Jerome Bonnet and Drew Endy call it a “recombinase addressable data” module, or RAD. The team worked for three years to find the right balance of proteins that would reliably flip the DNA sequences back and forth without degrading.

To test whether it worked, the team modified E. coli bacteria to fluoresce in different colors depending on the state of the DNA bit. In lab tests so far, it’s been able to monitor the activity of E. coli as they double more than 100 times. The team’s goal is to produce a byte, combining 8 of these RAD bits to build a larger memory system.

The work appears in this week’s issue of the Proceedings of the National Academy of Sciences.