Video: One of the Most Slippery Materials Ever 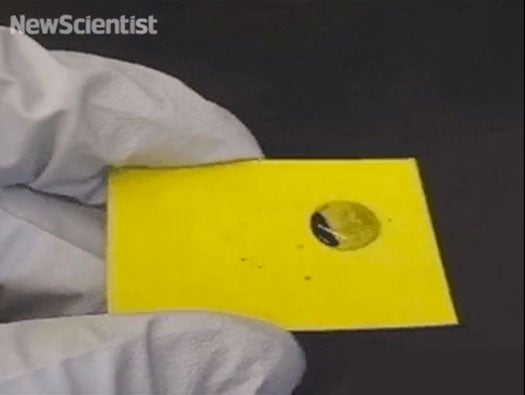 A new artificial material appropriately named SLIPS is one of the most slippery materials ever created. The new material, developed at Harvard, is self-cleaning and never gets dirty for a simple reason: nothing can stick to it.

SLIPS (Slippery Liquid Infused Porous Surface) was inspired by carnivorous pitcher plants, whose slippery, cylindrical leaves slide insects into the digestive juices at the base of the plant. The surface of the leaves’ spongelike texture is infused with water, which repels the sticky oils on insects’ feet. Lead researcher Joanna Aizenberg, a material scientist at Harvard, and her colleagues created an artificial version of the leaves surface, immobilizing a “lubricating film” (3M’s Fluorinert FC-70 perfluorinated fluid) inside a similarly spongy layer of Teflon. The result is “omniphobic,” repelling both water and oil-based materials. Liquids from oil and water to blood all roll right off the material when it’s tilted at merely 2 degrees, compared to 5 to 30 degrees for other surfaces.

The lubricating liquid in SLIPS seeps into any holes in the Teflon, so the material is also self-repairing. And because liquid does not compress at high pressure, the material works at the pressures found seven kilometers underwater.

There are many possible applications for SLIPS, from highly efficient oil pipes to a coating for airplanes that repels ice. But Aizenberg points out another application for the high-tech coating: the dreaded last drop of ketchup in the bottle. “It is a problem we all face,” she says. “We have a bottle of sauce and we are trying to get the last bit out but nothing is happening. If we used a substance like ours to coat the insides of bottles, it would be possible to get it all out.”