We’re still many years away from the first functioning quantum computer the size of a building, much less the first... 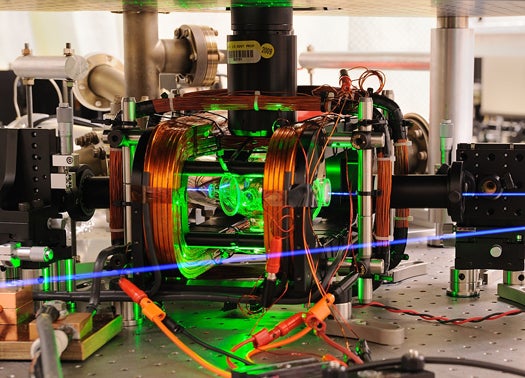 We’re still many years away from the first functioning quantum computer the size of a building, much less the first one the size of a desktop computer or a smartphone, but researchers at the National Institute of Standards andTechnology (NIST) are already moving toward smaller quantum computing devices. For the first time, physicists there have entangled two ions using microwaves rather than the usual array of laser beams, paving the way for miniaturized, easy-to-commercialize quantum computing technologies.

Quantum computers would leverage the unique properties of the quantum world to solve huge computing problems–problems our best and biggest classical supercomputers can’t cope with. But first we have to gain precise control over those particles, turning them into quantum analogs for our classical computer bits.

Ions are a good candidate for those quantum bits, or “qubits”–the basic building blocks of the quantum computing scheme. And the ability to manipulate ions with microwaves to achieve quantum entanglement–a phenomenon in which the properties of two separated ions become linked (and a central pillar of information storage and transfer in the quantum scheme)–is huge.

Microwaves are already used to carry wireless communications. The technology used to generate and control them is well understood, ubiquitous, and therefore relatively inexpensive. And while there is still a need for an ultraviolet laser to cool and measure the ions in a microwave entanglement setup, it’s a low-power laser that could feasibly be scaled down to the size of those lasers used in portable optical readers like CD or DVD players.

The rest of the technology also packs significantly less bulk. The entire layout described by the NIST researchers in an upcoming issue of the journal Nature is tabletop-size, or roughly one-tenth as big as the usual room-sized “laser park” needed to generate controlled ion entanglement with light. As the technology develops, the team thinks they could scale a microwave device down to the size of a desktop computer, and perhaps someday even a tablet or smartphone device (for a more detailed, technical explanation of how this technology works, click through). Microwaves also demonstrate other quantum computing advantages, like the ability to reduce errors caused by instabilities in laser beams.

But there’s still a long way to go before microwave technology unseats laser tech in the pursuit of practical quantum computing. The NIST team could only achieve entanglement with microwaves about 76 percent of the time. The best laser schemes miss less than one percent of the time.