China’s Moon Ambitions: Rover in 2013, Bring Home Samples in 2017, and a Manned Base to Follow

A Chinese official kicked off an international robotics conference in Shanghai this week by confirming China plans to send a... 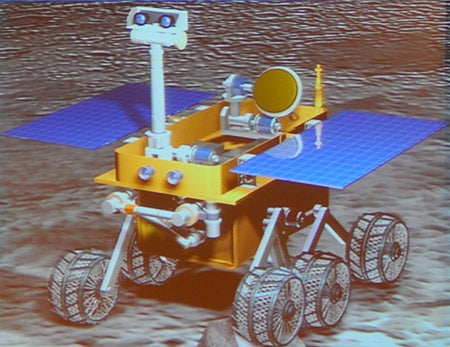 A Chinese official kicked off an international robotics conference in Shanghai this week by confirming China plans to send a robot to the moon within two years and aims to bring a lunar sample home by 2017.

The ultimate goal is a manned landing and lunar outpost, which China will start building after the sample-return mission, according to Ziyuan Ouyang, the chief scientist ofChina’s lunar exploration program. Dates are still pretty tenuous, but last month another Chinese space official said the country would send a man to the moon by 2025.

So far, things have been going just as planned for China’s nascent moon program, which launched a second orbiter last October. The Chang’e 2 mission saw several improvements over Chang’e 1, including a more powerful rocket that delivered the probe to the moon more quickly. Chang’e 3 is supposed to launch sometime in 2013 and land in Sinus Iridium, where it will deploy an autonomous rover.

The robot, pictured above, will be able to “choose its own routes, avoid obstacles, and perform science experiments with a suite of sensors, including cameras, x-ray and infrared spectrometers, and a ground-penetrating radar,” reports IEEE Spectrum, which is covering the IEEE conference.

It will have solar panels and a supplementary power source in the form of a plutonium-238 nuclear battery, the same type installed on the forthcoming Mars Science Laboratory rover.

After the rover mission, China will launch a temporary lunar drill, which will alight on the surface, take a sample and take off again. It will probably be easier to do this on the moon than on an asteroid.

Japan wants a moon base by 2020, and some members of Congress want us to have one by 2022, so if China is able to pull this off it sounds like it could start getting pretty crowded up there.