Researchers at the National Institute of Standards and Technology and the Weill Cornell Medical College have found a new means... 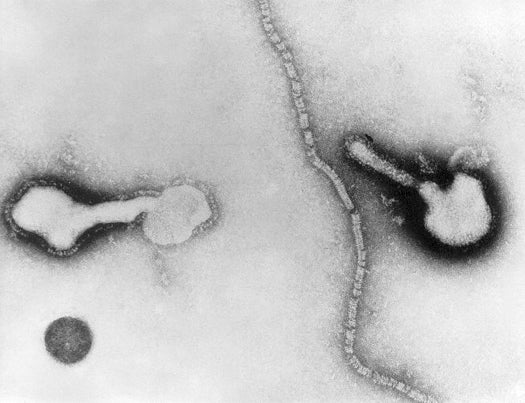 Researchers at the National Institute of Standards and Technology and the Weill Cornell Medical College have found a new means to hunt viruses the old fashioned way: by luring them in for the kill. Using artificial, protocellular “honey pots,” the researchers have devised a way to trap deadly human viruses and terminate them with extreme prejudice.

A new paper describes how these artificial honey pots can be disguised as the very cells a certain class of viruses–known as henipaviruses–is designed to infect. These viruses, which include respiratory syncytial virus, mumps, measles, and parainfluenza, infect cells via two predatory proteins that work in tandem to track and infect their prey.

One of these proteins works as a spotter, identifying the receptor protein on target cells and pointing it out to another protein. This second protein then essentially harpoons the target and pulls it in close so the virus can deliver its infectious payload. The catch, however, is that each virus can only do this once.

The honey pot protocells have a silica core to provide structure and are wrapped in a membrane like a normal cell. That membrane contains the “honey”: a protein known as Ephrin-B2, a target of henipaviruses. In experiments using non-pathogenic analogs to henipaviruses, the decoys were effective at essentially clearing a solution of active viruses, as they wasted their shot at proliferation trying to infect synthetic cells.

In the immediate term, the protocell honey pots could provide a powerful research tool for understanding how these viruses interact with–and eventually infect–healthy cells. But the more exciting prospect is that it could lead to a new class of antivirals. Since the honey pots target the infection method rather than the viruses themselves, it would be tough for viruses to evolve a resistance. Since the protocells are “infected” the same way as human cells, it’s likely that any evolutionary measure that emerged to avoid the protocells would also render viruses ineffective at infecting real cells as well.