Liver disease is the 12th-leading cause of death in the U.S., chiefly because once it’s determined that a patient needs... 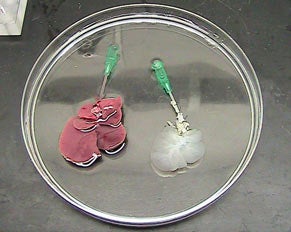 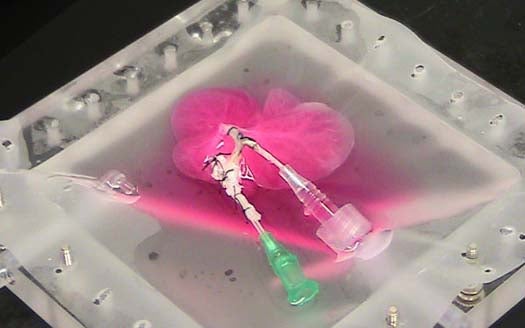 An unseeded rat liver has been stripped of its old cells and placed in culture to await a set of new, healthy cells. The pink fluid is a nutrient solution that keeps the organ’s architecture alive during the cellular swap.

Liver disease is the 12th-leading cause of death in the U.S., chiefly because once it’s determined that a patient needs a new liver it’s very difficult to get one. Even in cases where a suitable donor match is found, there’s no guarantee a transplant will be successful. But researchers at Massachusetts General Hospital have taken a huge step toward building functioning livers in the lab, successfully transplanting culture-grown livers into rats.

The livers aren’t grown from scratch, but rather within the infrastructure of a donor liver. The liver cells in the donor organ are washed out with a detergent that gently strips away the liver cells, leaving behind a biological scaffold of proteins and extracellular architecture that is very hard to duplicate synthetically (the blood vessel architecture in the liver is extremely complex).

With all of that complicated infrastructure already in place, the researchers then seeded the scaffold with liver cells isolated from healthy livers, as well as some special endothelial cells to line the blood vessels. Once repopulated with healthy cells, these livers lived in culture for 10 days.

The team also transplanted some two-day-old recellularized livers back into rats, where they continued to thrive for eight hours while connected into the rats’ vascular systems. However, the current method isn’t perfect and cannot seem to repopulate the blood vessels quite densely enough and the transplanted livers can’t keep functioning for more than about 24 hours (hence the eight-hour maximum for the rat transplants).

But the initial successes are promising, and the team thinks they can overcome the blood vessel problem and get fully functioning livers into rats within two years. It still might be a decade before the tech hits the clinic, but if nothing goes horribly wrong — and especially if stem-cell research establishes a reliable way to create healthy liver cells from the very patients who need transplants — lab-generated livers that are perfect matches for their recipients could become a reality.