Scanning your brain while you watch horror movies might hold the key to making them even more frightening. The findings could reshape the way scary movies—perhaps all movies—are filmed 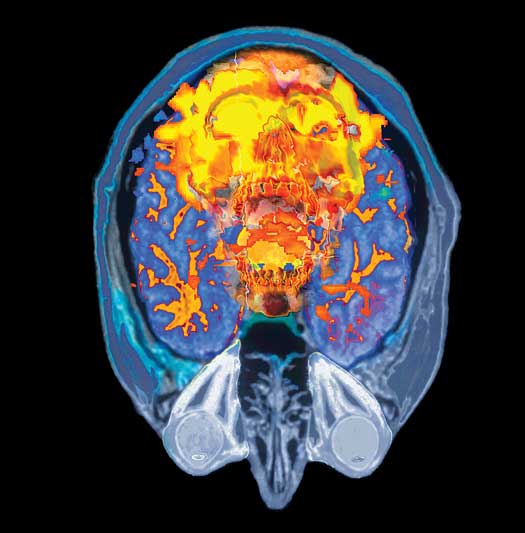 There’s no popcorn sold in this movie theater. The screen is tiny, the seating awkward. In fact, I’m lying on my back inside a narrow tube, with maybe two inches of wiggle room on all sides. But more unnerving than my accommodations is the serial-killer flick projected on the screen a few inches above my face. There’s a woman tied to a chair in a dingy basement, struggling as a masked man sneaks up from behind and slowly stabs her to death. The scene is terrifying, but, according to the people who put me in this tube, perhaps not terrifying enough.

The tube is a functional magnetic resonance imager (fMRI), a machine that produces real-time images of brain activity, usually for medical purposes. This particular device belongs to the San Diego neuromarketing firm MindSign, which for the past three years has used it to help Hollywood craft better movie trailers based on peoples’ neural responses to what they see onscreen.

The young field of neuromarketing is a controversial one. For every study that shows that a particular fMRI signal indicates a person’s preference among competing sodas or politicians, another study debunks it. But MindSign’s founders say that the technology is great for making exciting movie trailers. The average movie-trailer shot lasts one to two seconds, which happens to be the same rate at which an fMRI scans for brain activity. “It’s a perfect combination,” says MindSign’s president, Devin Hubbard.

“By looking at the sum total of brain reaction from areas like the amygdala, for fear, and Brodmann’s area 10, for executive function and memory, we can see if a trailer is producing strong emotional engagement,” says Martin Lindstrom, a neuromarketing expert and the author of Buyology, an examination of the subject.

But the reason I’m in this tube, watching this gruesome murder, is that MindSign and a few movie producers now think that the technology has a future as a tool for editing films. And I am their guinea pig.

The Focus Group That Can’t Lie

Late last year, Peter Katz, an independent film producer, saw a 60 Minutes story on neuromarketing and wondered what fMRI scans could tell him about his new horror movie, Pop Skull. He read about MindSign on Wikipedia and approached Hubbard. What makes fMRI particularly well-suited for horror, Hubbard and Katz argue, is a part of the brain called the amygdala, which scientists have identified as being responsible for handling primal reactions, particularly fear. If an fMRI scan shows activity in the amygdala, there’s reason to infer that the person is scared. Scan enough brains and average the results, and you could learn which buttons to push to increase the amygdala’s response.

Following these guidelines, the results from Katz and Hubbard’s early tests were surprising. A shot of a hand creeping along a wall incited a greater amygdala response than a scene involving the villain jumping out of the bushes—the opposite of what standard moviemaking rules would predict.

A few months later, Katz described his experiment to the brothers Drew and John Dowdle, the directors behind the zombie hit Quarantine and the forthcoming M. Night Shyamalan–produced thriller Devil. Intrigued, the Dowdles lent Katz one scene from their highly anticipated serial-killer tale, The Poughkeepsie Tapes. I and five other subjects watched this scene inside MindSign’s fMRI to find out if our resulting brain scans could provide enough information to re-edit the scene into a more compelling experience.

As the victim struggles in the foreground, the viewer’s amygdala [center] lights up on the fMRI scan, indicating intense fear.

A green filter, meant to heighten tension, turns out to reduce activity across the brain. Removing the filter should make the scene scarier.

Neuromarketing could save production houses millions. With DVD sales down, movie revenue is at an all-time low, so studios rely on rigorous focus-group testing to ensure that films will do well at the box office. Long before a movie hits theaters, input from thousands of test viewers shapes the final product. Endings are changed, characters are edited out, all in the hopes of making movies that earn more money. But all those million-dollar decisions are based on peoples’ subjective impressions. That’s where MindSign comes in.

“The research consistently shows that focus groups will tell you what they think you want to hear, or what they believe the answer should be,” says Clinton Kilts, director of the Brain Imaging Research Center at the University of Arkansas. “Neuroimaging can cut through those layers of bias.” In other words, it makes the subjective objective. It has worked before: In 2007, focus groups in Great Britain universally hated a game show called Quizmania. (Asked to rate the show on a scale of good to bad, 30 percent hated it so much, they drew a box for “terrible.”) The network tested it with fMRI and found evidence suggesting that people would like the show. It went on to become a mega-hit.

The scene the Dowdles provided, however, seems an unlikely candidate to benefit from this process. With trailers, fMRI helps MindSign engineers determine which sequence of action or camerawork elicits the greatest response. But the two-minute scene I’m watching is a single, static shot; there’s not much to edit. For the first 21 seconds, all I see is the victim, bound and gagged in the foreground, whimpering. The killer’s hand appears in the corner of the room at second 22, but he crawls so slowly that it takes him 40 seconds to cross the room. The next 20 seconds are filled with the killer standing up, revealing his Freddy Krueger–like talons only at the last instant. In the final 20 seconds, he presses those talons into the woman’s neck, and she bleeds to death—and even this takes place with an economy of motion and sound. The scene is already tight, intense and terrifying. What could possibly be changed?

The scans show our brains in grayscale, with small red and orange squares dancing across them. The regions that light up do so because at that moment they are drawing more oxygen from the blood, a sign that they are processing information. When MindSign’s scientists average the scans, the first thing they reveal is that the Dowdle brothers really do know how to scare people: Our amygdalas lit up like a Christmas tree throughout the entire scene. But you need to light up other regions of the brain along with it to make a movie that’s truly memorable, one that still disturbs you the next day.

One editing fix jumps out immediately. Just before the 16-second mark, the scans reveal increased activity in the brain regions related to visual, auditory and executive function, as well as personal meaning. This indicates that not only is the scene frightening us but also that we’re internalizing the fear, creating a stronger response to the imagery by relating it to our personal lives. At second 16, the Dowdles change the film’s color from rich flesh tones to a grittier grayish-green. The filmmakers intended this to heighten tension before the killer emerges, but, for unknown reasons, the instant the color fades to green, the scans show that the viewer’s brain begins to disengage. Over the next few seconds, activity drops off steeply.

Asked what I thought of the scene, I reported that I was terrified the entire time. Nothing in my experience made me think that the tension had lessened, much less that a slight color change had been the cause. But according to the readings, my brain had lost interest in the scene by the time the killer revealed himself. “Once you see the scans laid out next to the scene,” says Drew Dowdle, “it’s right there.” Simply removing the green filter will provoke a stronger neural response and make a scary scene even scarier. Hubbard hopes that this kind of informed re-editing will become a proven use for the technology. “The best one can hope to learn from a focus group is that a certain scene isn’t working,” Katz says. “But fMRI might be able to pinpoint the exact spot where things go wrong and, possibly, provide enough data to fix the problem. It’s the difference between using a battle ax or a scalpel to perform surgery.”

Whether other genres of film will be able to make use of the technology is unclear, largely because science can’t yet connect fMRI scans to more-complicated emotions. The subtler the artistry of the film, the harder it is to decode its physical effects on the brain. Horror is easy: MindSign can zero in on the amygdala to provide a baseline determination of whether you’re scared. But there isn’t a region of the brain that’s dedicated to processing, say, romantic comedies.
In the meantime, neuroscientists will keep refining horror. Lindstrom, the neuromarketing expert, notes that people often find the anticipation of being scared more frightening than the climactic moment itself. That shows up on the fMRI, he says, and with more experiments, directors might be able to enhance that experience in horror films.

Hollywood could embrace fMRI the same way it has 3-D, as an effective storytelling tool for bringing audiences deeper into the film, says David Wertheimer, the director of the Entertainment Technology Center at the University of Southern California’s film school. “fMRI has that same potential,” he says. “You can’t replace the creative process with technology. But if it can augment that process—if you can help a director make a better, or scarier, movie—they’re going to want to use it.”