Did a Theoretical Physicist Already Predict the End of Lost?

Let’s play a game in which we all consider for a moment a question posed today by Science Daily: “Could... 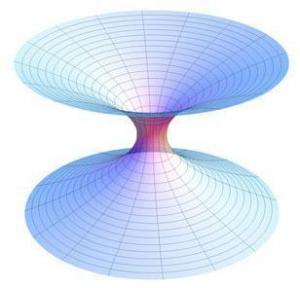 Let’s play a game in which we all consider for a moment a question posed today by Science Daily: “Could our universe be located within the interior of a wormhole which itself is part of a black hole that lies within a much larger universe?” Now, guess: Is that a theoretical physicist’s latest hypothesis on the creation of the universe, or the secret ending of LOST?

Turns out, it could be both. Indiana University physicicst Nikodem Poplawski’s new paper in Physics Letters B goes on: “Because Einstein’s general theory of relativity does not choose a time orientation, if a black hole can form from the gravitational collapse of matter through an event horizon in the future then the reverse process is also possible. Such a process would describe an exploding white hole: matter emerging from an event horizon in the past, like the expanding universe.”

As such, general relativity makes more sense if our universe existed in the wormhole in between, like a waypoint in space-time between a black hole and white hole, our little cosmic island the only thing separating the light and the dark. J.J. Abrams couldn’t have written it better himself.