A team of researchers from Japan and Michigan have built a molecular computer whose operation mimics a human brain. The... 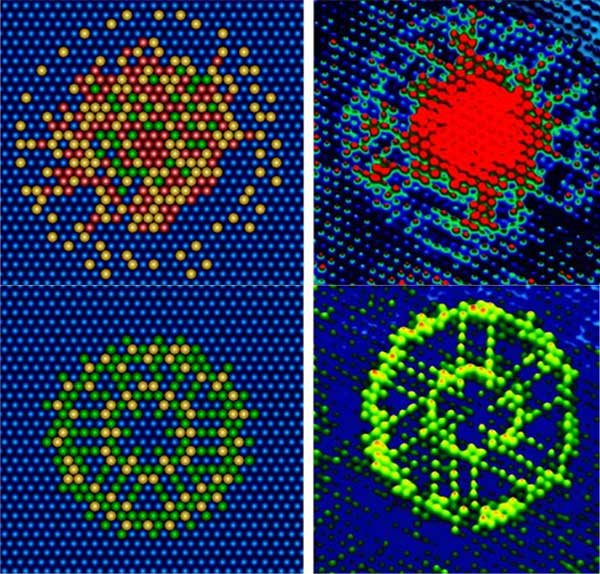 A new molecular computer can generate different patterns equivalent to ones and zeroes in a conventional computer. A. Bandyopadhyay et al
SHARE

A team of researchers from Japan and Michigan have built a molecular computer whose operation mimics a human brain. The tiny circuit, comprised of organic molecules on a gold substrate, is capable of super-fast concurrent calculations that rival the firing of neurons.

When it comes to multitasking, even the fastest computers are still miles behind the human brain. Neurons only fire about a thousand times per second — way slower than the petaflops achieved by today’s fastest digital processors — yet people are still smarter than computers.

“I can see you, recognize you, talk with you, and hear someone walking by in the hallway almost instantaneously, a Herculean task for even the fastest computer,” physicist Ranjit Pati of Michigan Technological University says in a press release.

This is because digital computers process information sequentially, while the brain is a tangled web. Electrical impulses in the brain follow complex neurological networks involving several concurrent operations; computers can’t do that.

To make a smarter computer, Pati and his colleagues used an organic molecule called DDQ, which is made of nitrogen, oxygen, chlorine and carbon. It can switch among four conducting states — 0, 1, 2 and 3 — compared to the binary switches, 0 and 1, used by digital computers. The neat part is, approximately 300 molecules talk with each other at a time during information processing,” Pati says. “We have mimicked how neurons behave in the brain.”

The organic processor is intelligent and self-healing. It can solve several problems on the same grid, and if there’s a defect, it heals itself. Similarly, the brain also solves several problems at once, and if one neuron dies, another neuron takes over its job. The organic processor can provide answers for problems that can’t be solved by existing computers. There are no known algorithms for predicting natural disasters and disease outbreaks, for instance, Michigan Tech says in the press release. To prove the processor’s capabilities, the team mimicked two natural phenomena in the molecular layer: heat diffusion and the evolution of cancer cells.

The circuit’s patterns even look like a brain at work — the scanning tunneling microscope images look creepily similar to MRI images of the human brain. With breakthroughs like this, it may only be a matter of time before the Singularity.