Multitouch screens are being integrated into surfaces all around us; not just our computer monitors, but our walls, our tables,... 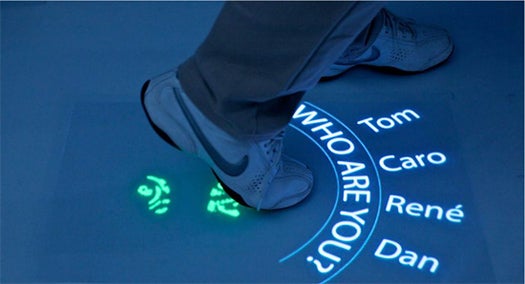 Multitouch screens are being integrated into surfaces all around us; not just our computer monitors, but our walls, our tables, our countertops — pretty much any surface that is somewhat flat. So why not take advantage of the vast amount of flat workspace going un-utilized beneath our feet? So goes the thinking behind Multitoe, a floor-based interface that users control with their feet.

Most multitouch surfaces are limited by the lengths of our arms: a multitouch surface must be small enough that we can comfortably reach every inch of surface, otherwise the unreachable portions of screen are worthless. This in turn limits how many objects we can cram onto the screen at once.

But Multitoe allows users to wander around a canvas of — theoretically — limitless size, manipulating objects with their kicks. Based on frustrated total internal reflection, Multitoe can identify and track several different users working on the same screen and recognize their foot postures, allowing them various degrees of freedom depending on the users balance, posture and movement.

Essentially, Multitoe identifies users by their footprints, using the unique characteristics of the bottom of their shoes to differentiate between them. It can ignore inactive users, tell the difference between walking and screen commands, and even determine the orientation of a user’s head based on his or her balance. Multitoe can even perform precision tasks like typing via a virtual hotspot that the computer affixes to the ball of the foot.

As such, Multitoe is far more than a means to tap out “Heart and Soul” on a virtual keyboard; check out the young lady blasting her way through a first-person shooter in the video below. While Multitoe might seem limited in some capacities — for instance, there are only two points of contact rather than the potential ten we get from our fingers, a fact that might complicate tasks like rotating objects on screen — it’s certainly an interesting technology and could have vast applications.

Imagine smart floors that can guide you directly to a particular painting in a museum and then display information on demand without cluttering the walls with tiny placards. Or Dance Dance Revolution — which by our estimation will never be the same.