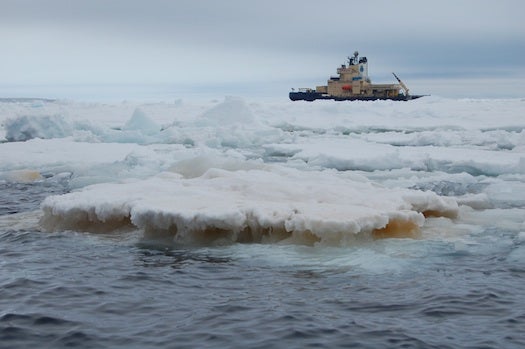 This photo shows the ship on which researchers traveled while collecting plankton samples in Antarctica. Layers of brown ice, like those in this photo, often contain diatoms. Image courtesy Georgia Institute of Technology
SHARE

Russia’s the only nation with nuclear powered ice breakers, and its latest addition, “Arktika”, is the top dog of Arctic shipping. The Arktika launched early on June 16, ahead of its original 2017 schedule. The 568 foot leviathan displaces over 33,000 metric tons of water and can break through ice 10 feet thick and 13 feet deep, according to Sputnik News, a Russian government sponsored news agency. Baltic Shipyard reports that with a crew of 75 people, the Arktika will operate in the Western and Eastern Arctic seasonally.

NPR suggests the move follows global warming’s increasing of Arctic shipping routes and the construction of Russian bases in the Arctic Circle. The Arktika’s ‘sister ships’, “Sibir” and “Ural”, are scheduled to launch in 2019 and 2020, respectively. The original Arktika was the second nuclear powered icebreaker to be built, and the first surface ship to reach the North Pole. Now decommissioned, it exceeded its expected service hours by 75 percent and continues to be studied as an engineering specimen.