A Pair Of Robot Arms Could Make You Dinner

This machine learns to cook by watching you 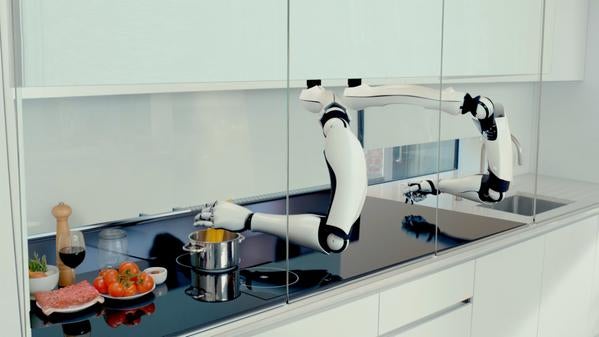 The 2011 MasterChef champion Tim Anderson has a new apprentice–a robo-chef.

“It’s the ultimate sous-chef,” Anderson told BBC News. “You tell it to do something–whether it’s a bit of prep or completing a whole dish from start to finish–and it will do it.”

We’re already giving robots weapons, so why not let them take over our homes too? The London-based company Moley Robotics is demonstrating their new robot chef prototype at Hannover Messe, an annual trade fair for the industrial technology. The robot’s first dish will be crab bisque.

According to the company, the mechanical chef, which incorporates 20 motors, 24 joints and 129 sensors, learns how to cook by watching a plain old human chef, whose movements are turned into commands that drive the robot hands. Moley hopes to eventually create a product that can do everything from preparing the ingredients to cleaning up the kitchen, and include a built-in refrigerator and dishwasher.

The idea is to support the robot with thousands of app-like recipes, and it would allow owners to share their special recipes online.

Can robo-chef handle the complexities of cooking? Rich Walker, whose company Shadow Robot designed the machine, thinks it can overcome challenges like deciding when beaten eggs have peaked.

“Something would change; we would see it in the sensor data. Maybe something gets stiffer or softer,” he said. “We should be able to sense that and use it as the point to transition to the next stage of the cooking process.”

Don’t hang up your aprons yet though, because this product won’t be on the market for another two years at least. You’re also going to have to fork out almost $15,000 to get one, so even then you may be better off making your own bisque.