You Owe Your Daily Routine To The World’s Fair

Inventions that'll take you from breakfast to bedtime 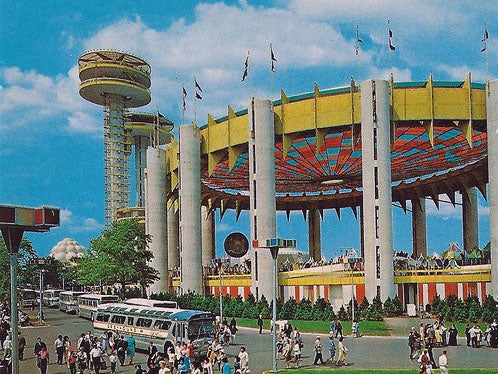 Begun in 1851, the World’s Fair once served as an open showroom for technical oddities, scientific breakthroughs, and cultural mash-ups. Although it still draws millions of visitors every five years, upstarts like the Consumer Electronics Show and Apple’s special media events have long since eclipsed its role in breaking tech news. Today, the fair focuses on global challenges: This year’s Expo 2015, which starts May 1, in Milan, Italy, will explore world hunger. Yet, it’s the World’s Fairs past that define our lives now; they exposed people to technologies that at the time seemed bizarre and futuristic–but today seem quite familiar.

Tuck into a carb-heavy breakfast of Shredded Wheat, created by inventor Henry Perky, or, if there’s a chill in the air, Cream of Wheat, invented by miller Tom Amidon. These cereal-aisle staples both debuted at the World’s Columbian Exposition in 1893 in Chicago.

Tune in to The Today Show, courtesy of RCA. The defunct company pioneered the first television broadcast at the 1939 New York World’s Fair, streaming live footage of Franklin Delano Roosevelt on its early TVs, called TRK-12s (for their 12-inch tube screens).

Plug in your laptop at the local Starbucks and think of inventor Harvey Hubbell. He debuted the detachable plug at the 1904 Louis­iana Purchase Exposition in St. Louis. Before that, you hard-wired devices to live post terminals–time-consuming and dangerous.

Skype with mom. If she complains about your newfangled technology, remind her that Bell Labs demoed the Picturephone at the 1964 New York World’s Fair. Huge lines formed to use its tiny screen and push-button phone to see and talk to visitors at Disneyland in California.

Find a date on OkCupid. Computer hook-ups go back to the 1964 New York World’s Fair. Parker Pens connected 1.2 million fairgoers to pen pals around the globe with a computer that matched ages and interests. It had hoped to spur life-long friendships (and pen buying).

Head to an IMAX theater with your date to see Tomorrowland. The format first captivated moviegoers at Expo ’70 in Osaka, Japan, with the 17-minute IMAX-ready Tiger Child. Don’t forget the popcorn, first popularized at the 1901 Pan-American Exposition in Buffalo, New York.

This article was originally published in the May 2015 issue of Popular Science, under the title “You Owe Your Daily Routine To The World’s Fair.”