Researchers Teach Robots To Fall Over Gracefully When Shoved

The delicate art of not breaking into a million pieces 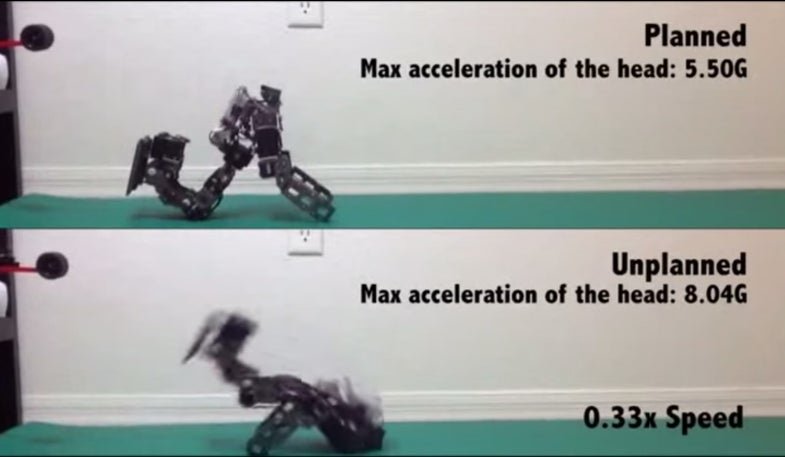 It takes skill to fall with grace. Not in a metaphorical sense, but in a very real one: emerging relatively unharmed after a tumble is a skill human have and can refine that robots lack innately, often to comical effect. New research by Georgia Tech wants to protect expensive, wobbly robots of the future, by programming them to fall safely and gracefully. In order to test this, first they needed to shove over a bunch of robots:

There are plenty of robots designed to avoid falling, like Alphabet’s surreal animal-like BigDog series of machines. But bipedal robots, or bipedal-ish robots, designed to operate in spaces made for humans, don’t have the luxury of a weird, well-balanced body. As a result, they tend to fall over a bunch.

To compensate, Ph.D. student Sehoon Ha and professor Karen Liu created a planning algorithm that lets robots break various kinds of falls, including using arms to protect their head and tumbling sideways to minimize the damage. Their paper, “Multiple Contact Planning for Minimizing Damage of Humanoid Falls“, presented at the IEEE/RSJ International Conference on Intelligent Robots and Systems, details a system that lets robots survive a range of impacts.