We created a frankenhouse of the most common phobias

Explore the things that keep humanity up at night—and learn why they haunt us. 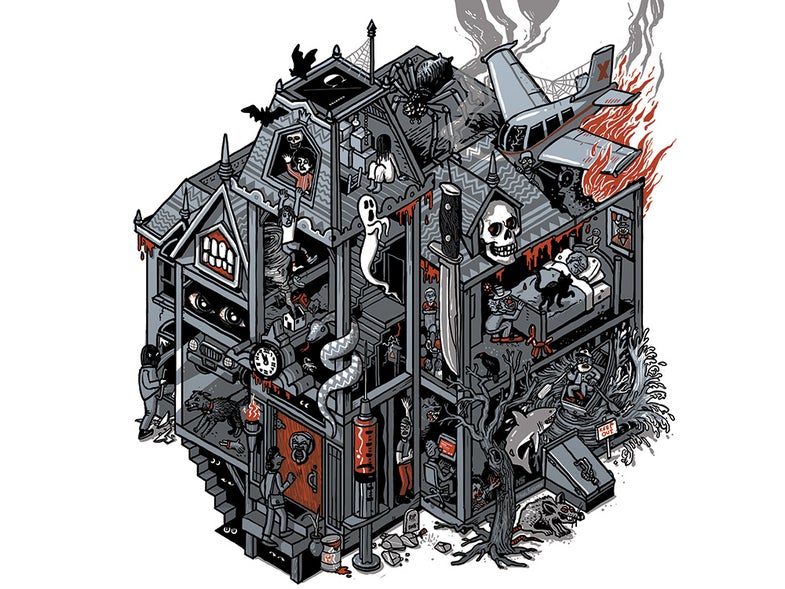 The visceral urge to flee roving sharks has kept us safe for millennia. So it makes sense that 25.4 percent of us fear these toothy predators, despite zero Americans dying in an attack in 2017. Other terrors aren’t so obviously rooted in evolution, but pack some of the common ones into a house—as we did—and you’re bound to find something to rattle your bones.

We’re not born acrophobic, but we learn to be early on. Even in our largely cliff-free lives, a fear of heights remains so fundamental that 9-month-old babies avoid drop-offs when crawling.

Each year, 100,000 people die from snake bites, but it could be worse. Humans are especially good at spying slitherers: Even in our peripheral vision, we’re better at spotting snakes than other potential threats such as spiders, likely because the fanged reptiles pose a greater danger.

Although glossophobia is extremely common, it’s rarely disabling enough to warrant treatment. Broader social anxiety, however, affects about 15 million American adults, many of whom rely on therapy or medication.

Ten people in the United States drown each day. Though vast waters might trigger fright for about one-fifth of us, the depth of an ocean or lake is im­material. Toddlers can drown in just 2 inches of water, and 25 percent of all drownings happen in less than 3 feet.

Related: Rollercoasters are stressful and that’s why you like them

Source: 2017 Chapman University Survey of American Fears
This article was originally published in the Winter 2018 Danger issue of Popular Science.