Control a Robot with Your Mind 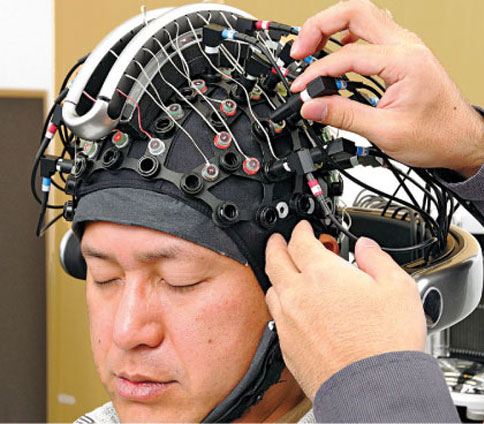 What: Brain-Machine Interface by Honda, which lets you control a humanoid with your mind
Where: Tokyo
Why: Disability affects one in five Americans.
Wow: Requires no surgical implants and boasts a 90 percent accuracy rate

Honda’s new Brain-Machine Interface helmet gives you the power to communicate telepathically with humanoids. It reads your thoughts by measuring changes in electrical current and blood flow in the brain. Say you imagine moving your right hand toward the sky, but you can’t actually move your right hand. Electrodes inside the skullcap detect your intention and transmit the mental data to Honda’s Asimo robot, which makes the movement for you. For people confined to a wheelchair or bed, the technology could offer real independence. According to Honda spokesman David Iida, it’s the only mind-machine interface in the world that uses electroencephalography (EEG) and near-infrared spectroscopy sensors instead of surgically implanted electrodes. This is both less invasive and more accurate: The company says that Asimo follows instructions from the skullcap wearer 90 percent of the time.

The next design goal is to make the headgear less obtrusive.