The FDA finds dangerous levels of medications in weight-loss supplements 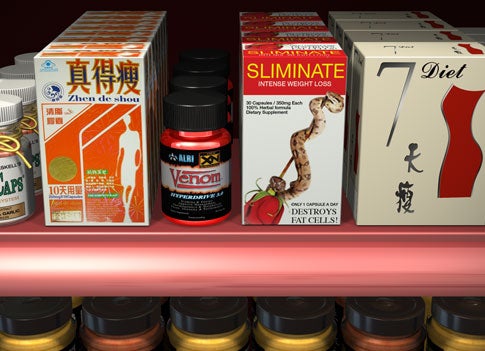 The YouTube promo for Zhen de Shou weight-loss capsules is farcical: The camera slowly pans across photos of depressed overweight girls becoming euphorically thin and warns, “Beware of cheap imitations.” But the ad hides a real danger. According to recent tests by the Food and Drug Administration, Zhen de Shou and 68 other weight-loss supplements manufactured in the U.S. and abroad contain undeclared pharmaceuticals. That means millions of Americans popping over-the-counter diet pills might also be unwittingly ingesting medication at potentially deadly doses.

Nearly all the supplements that tested positive contain the appetite suppressant sibutramine, the generic name for Meridia, one of two prescription drugs approved for long-term obesity treatment. Never mind that administering it without a prescription is illegal; sibutramine elevates blood pressure and heart rate and can cause stroke and heart attack. In some supplements, the FDA detected sibutramine levels of four times the highest doctors can safely prescribe.

Worse yet, says Pieter Cohen, a physician at Cambridge Health Alliance in Massachusetts, because the products don’t list the drugs, “when they do cause problems, people might not make the connection.” Cohen discovered this firsthand after some of his patients complained of heart palpitations. It turned out they had been taking Brazilian Diet Pills, which tested positive for a drug that the body turns into amphetamine.

In its investigation, the FDA also found in diet pills such drugs as rimonabant, an appetite suppressant that was pulled from European shelves and never approved in the U.S. because of a potential link to suicide, and phenolphthalein, a laxative linked to cancer and discontinued in 1999. Despite the FDA’s warning to consumers last December, as of press time, manufacturers had recalled only three of the supplements. The agency is following up on all the products, says Mike Levy, who oversees new drugs and labeling compliance at the FDA, and can seize the goods if companies don’t voluntarily pull them. 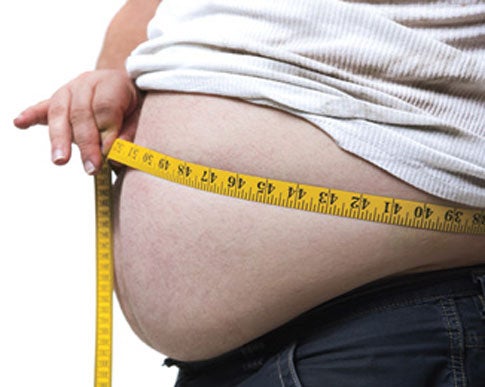 How do prescription drugs make their way into supposedly “natural” supplements? It probably goes back to the source. Some 60 to 80 percent of the active ingredients for pharmaceuticals are manufactured in China and India, where manufacturing regulations are more lax, estimates Darrell Abernethy, the chief science officer for U.S. Pharmacopeia, the organization that sets scientific standards for pharmaceuticals for the FDA. “If someone snuck sibutramine to scientists in one of China’s [illegal] cottage laboratories, they could reverse-engineer it in a week,” he says.

Levy suspects that manufacturers overseas spike diet supplements with synthesized drugs and ship them to the U.S. in orders too small to police. American distributors of two products on the FDA’s list — Applied Lifescience Research Industries’ Venom Hyperdrive 3.0 (sibutramine) and Nikki Haskell’s StarCaps (bumetanide, a diuretic) — blame tainted ingredients from abroad. But, Levy says, “I think much of it is willful blindness.”

Making matters murkier, the FDA doesn’t screen supplements for safety pre-market — let alone effectiveness — so products guaranteeing weight loss of 50 pounds in two weeks go unpoliced until they hurt someone. That could soon change, though, after a March report from the federal Government Accountability Office suggested that Congress give the FDA more authority to regulate supplements and require makers to disclose full ingredient lists and all reported side effects.

For now, determining exactly who’s spiking the pills is near impossible. And whoever the culprits, demand for the supplements won’t stop. If someone loses weight because he is unknowingly taking a drug, he will keep buying the product. If he quits, he’ll gain it all back — the hard truth of even prescription medication.

“There is, sadly, a business model,” says Marc Ullman, a food-and-drug lawyer in New York who is handling StarCaps’ recall (and insists that his client was duped by suppliers). “A company will make insane claims, put a pharm ingredient in their product, and shut down and start another business if they get caught. What’s the worst thing that will happen?” he asks rhetorically. “A warning letter from the FDA?”