iRobot's lovable fighting machine can be toted in your pocket 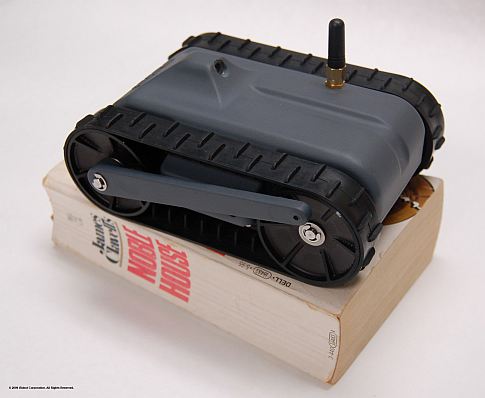 iRobot’s multipurpose PackBot has helped lead the way among war-bots, disabling improvised explosives and carrying out recon missions for snipers. But soon paperback-sized robots such as the Ember prototype could join their larger cousins on the battlefield.

Ember’s strength rests with numbers and disposability — one soldier could theoretically carry around several of the bots and place them to create a networked mobile swarm. Each robot might carry several radios and sensors that make up a small part of the larger wireless network envisioned in the Army’s now-gutted Future Combat Systems.

The one-pound robot gets around easily enough for its size. Twin flipper mechanisms allow the robot to climb obstacles and even right itself after awkward falls. Future versions are slated to pack enough artificial intelligence to detect and maneuver around obstacles in cluttered urban environments.

Soldiers need not treat Ember gently, either. Dropping or throwing the tiny bot works just fine — apparently toughness is an inherited trait in the iRobot family, if PackBot has anything to say about it on Facebook.

“I like to think of myself as a rugged, shockproof, waterproof part of the team,” PackBot confides on its personal page. Since early this year, the robot has joined college students and narcissists alike in polishing its online credentials and sharing family photos of Ember. It’s kind of charming, even if the choice of “Mr. and Mrs. Smith” under favorite movies seems a bit random for a robot.

The trend toward smaller robots doesn’t completely shunt aside the bigger unmanned ground vehicles, such as the tank-like Ripsaw that won one of PopSci‘s “Inventions of the Year.” Large and small bots alike may simply play their own roles to ensure unmanned domination of the battlefield; as PackBot brags on Facebook, “I came, I saw, I conquered.”