Look for your favorite artists soon on magnetic tape 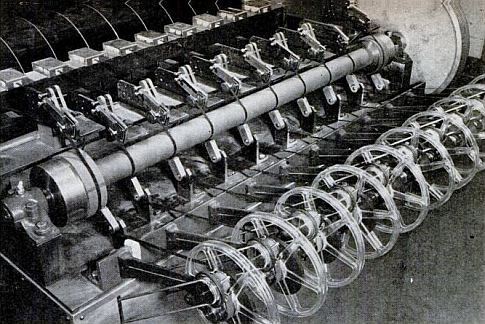 This multiple tape recorder removes the last obstacle to commercial recordings on magnetic tape — the mass production of duplicate tapes. It makes eight duplicates at once at three times normal speed. It can also record two sound tracks on the same tape at the same time. Thus the machine can turn out eight hour-long recordings in 10 minutes, or 48 an hour.

Signals from a master tape are amplified and then fed into recording heads, shown above. A common capstan keeps the master and copy tapes at the same speed. In playback, one side of the double sound track plays as the tape reel unwinds, the other as it winds up. Minnesota Mining and Mfg. Co. made it.