PackBot, iRobot’s longtime military robot, is getting some new cousins that just may be the most efficient cleaner bots yet.... 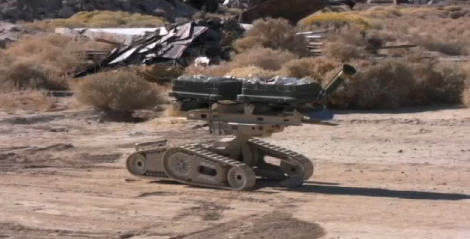 PackBot, iRobot’s longtime military robot, is getting some new cousins that just may be the most efficient cleaner bots yet. Nicknamed Warrior, the PackBot lookalike launches a rocket that tows a string of grenades to blow up land mines, barbed wire or other obstacles.

iRobot unveiled Warrior over Memorial Day weekend, and this impressive video (after the jump) might make you proud to be a robot-loving American.

The Warrior is much bigger than its PackBot kin; where PackBot is hand-portable, Warrior is not. Military personnel remotely drive the robot close to the area that needs to be cleared, and then Warrior fires an APOBS, an Anti-Personnel Obstacle Breaching System. It’s basically an explosive line charge with a parachute at the end.

The rocket drags a 150-foot line of grenades through the air, and once it lands, the grenades explode and destroy any improvised explosive devices, land mines or other obstacles. The result is a clear, secure path.

It’s similar to the Python explosive whip developed by the British Army. That weapon casts a 1,600-foot tube across the ground, like a fisherman, and explodes any mines, traps or IEDs in its path. But the Python is attached to an armored truck, while the Warrior can go almost anywhere, keeping a safe distance from its human operators.

(This article originally referred to Warrior as an updated PackBot; while they’re similar, Warrior is larger.)