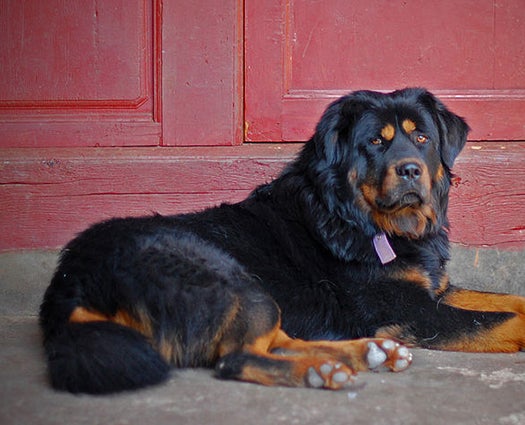 See Spot run. See Lassie save Timmy from a well. See Tibetan Mastiffs climb 4,500 meters above sea level on the Tibetan Plateau. The ever-so-fluffy Tibetan Mastiff, which commonly serves as a guard dog for the plateau’s residents, is able to breathe comfortably at high altitudes. Like the Tibetan people, Tibetan Mastiffs have adapted to air with less oxygen.

Ya-Ping Zhang and a team of scientists examined sets of genes from 32 Tibetan Mastiffs, 20 Chinese native dogs, and 14 wolves to investigate how the Mastiffs have adjusted. They looked for variations in the DNA sequence called single-nucleotide polymorphisms (SNPs, also pronounced simply as “snips”). The scientists genotyped the SNPs in the Mastiffs and compared them to the ones in the dogs and wolves.

After finding more than 120,000 SNPs, Zhang and the scientists identified 16 genes with signals of positive selection in the Tibetan Mastiff – 12 of these genes are connected to functions in the body that would help the canine adapt to high altitudes with low oxygen levels. Several of these genes are responsible for the building of hemoglobin, which helps transport oxygen through blood, and monitoring metabolism. Oxygen is required to process consumed food into energy, so efficient metabolizing means less oxygen is used. One of the genes, EPAS1, has also been linked to helping Tibetan humans adapt to high altitudes.