Like a neural wiretap that could someday modify the brain 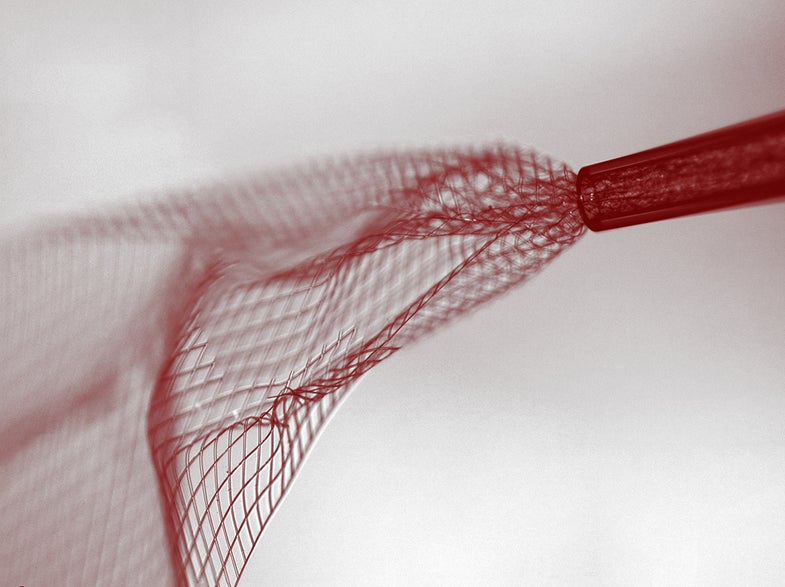 Ever since scientists figured out that the brain communicates via electricity, they’ve been trying to understand it–and manipulate it. Now a team led by researchers from Harvard University has developed an injectable mesh that can pick up electrical signals from neurons in the brain. This could help researchers better understand the brain and how cells communicate with one another, but could eventually change the brain itself, injecting drugs to specific brain regions or improving our memories.

Researchers have already been developing electronics that fit into the brain, to do things like deliver electric shocks or help amputees control prosthetic limbs, but they aren’t widely used because the surgeries needed to put them in place are very invasive. In this study, published yesterday in Nature Nanotechnology, researchers were able to put the electronic mesh in place by injecting it through a needle .1 millimeter in diameter. The mesh is a net-like web made of metal wrapped in polymers just a few millimeters thick, which makes it 100,000 times more flexible than similar electronics, according to study author Charles Lieber. When it was injected in mice, the mesh fully unfurled around their brains within a half hour and retained more than 80 percent of its functionality—all with no negative impact on the mice’s health.

The device still needs to be more stable before it can be tested in humans, because it will need to last a while. But even its use in mice could soon help researchers figure out how brain cells communicate or understand pressure changes involved in traumatic brain injuries like concussions. In the more distant future, injectable mesh could deliver drugs to specific parts of the brain or wirelessly transmit signals to a computer or smartphone. Eventually devices like these could help users store more information and memories in their brains, like adding more RAM to a computer’s hard drive.

“We have to walk before we can run, but we think we can really revolutionize our ability to interface with the brain,” Lieber told Smithsonian.