How the deadly worldwide pandemic, the Spanish Flu, got its name

What's in a name? 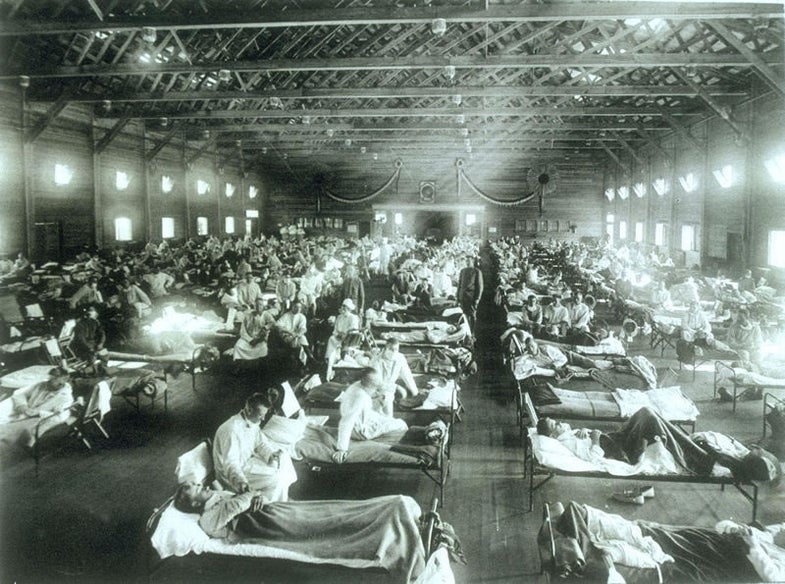 The following is an excerpt from Pale Rider: The Spanish Flu of 1918 and How It Changed the World * by Laura Spinney.*

When a new threat to life emerges, the first and most pressing concern is to name it. Once it has been named it can be spoken of. Solutions to it can be proposed and either adopted or rejected. Naming is therefore the first step to controlling the menace, even if all that is conferred with the name is the illusion of control. So there’s a sense of urgency about naming; it must happen early. The trouble is that, in the early days of an outbreak, those observing the disease may not see the whole picture. They may misconstrue its nature or origin. This leads to all kinds of problems later on. The name first given to AIDS – gay-related immune deficiency – stigmatized the homosexual community. Swine flu, as we’ll see, is transmitted by humans, not pigs, but some countries still banned pork imports after a 2009 outbreak. Alternatively, the disease may ‘outgrow’ its name. Ebola is named for the River Ebola in Central Africa, for example, but in 2014 it caused an epidemic in West Africa. Zika virus has travelled even further. Named for the forest in Uganda where it was first isolated in 1947, in 2017 it is a major threat in the Americas.

To try to prevent some of these problems, in 2015 the World Health Organization issued guidelines stipulating that disease names should not make reference to specific places, people, animals or food. They should not include words that engender fear, such as ‘fatal’ or ‘unknown’. Instead, they should use generic descriptions of symptoms such as ‘respiratory disease’, combined with more specific qualifiers such as ‘juvenile’ or ‘coastal’, and the name of the disease-causing agent. When the need arises to distinguish between diseases that lay equal claim to these terms, this should be done using arbitrary labels such as one, two, three.

The WHO working group deliberated long and hard over this problem, which is not an easy one to solve. Take SARS, for example, the acronym for severe acute respiratory syndrome. It’s hard to imagine how it could offend anyone, but it did. Some people in Hong Kong were unhappy about it – Hong Kong being one of the places affected by an outbreak of the disease in 2003 – because Hong Kong’s official name includes the suffix SAR, for ‘special administrative region’. On the other hand, names the current guidelines would rule out, such as monkey pox, arguably contain useful information about the disease’s animal host and hence a potential source of infection. The working group considered naming diseases after Greek gods (Hippocrates would have been horrified), or alternating male and female names – the system used for hurricanes – but eventually rejected both options. They might have considered a numerical system that was adopted in China in the 1960s, in an attempt to prevent panic (diseases one to four were smallpox, cholera, plague and anthrax, respectively), but in the end they decided against too radical an overhaul. The current guidelines are designed to prevent the worst naming sins, while still leaving scientists room to be creative.

These guidelines, of course, did not exist in 1918. Moreover, when influenza erupted that year, it did so more or less simultaneously all over the world, affecting populations that had embraced germ theory and others that had not. Those populations often had startlingly different concepts of disease per se. Since disease is broadly defined as the absence of health, whether or not you recognize a set of symptoms as a disease depends on your expectations of health. These might be very different if you live in a wealthy metropolis such as Sydney, or an Aboriginal community in the Australian Outback. The world was at war in 1918, and many governments had an incentive (more incentive than usual, let’s say) to shift the blame for a devastating disease to other countries. Under such circumstances, that disease is likely to attract a kaleidoscope of different names, which is exactly what happened.

When the flu arrived in Spain in May, most Spanish people, like most people in general, assumed that it had come from beyond their own borders. In their case, they were right. It had been in America for two months already, and France for a matter of weeks at least. Spaniards didn’t know that, however, because news of the flu was censored in the warring nations, to avoid damaging morale (French military doctors referred to it cryptically as maladie onze, ‘disease eleven’). As late as 29 June, the Spanish inspector general of health, Martín Salazar, was able to announce to the Royal Academy of Medicine in Madrid that he had received no reports of a similar disease elsewhere in Europe. So who were Spaniards to blame? A popular song provided the answer. The hit show in Madrid at the time the flu arrived was The Song of Forgetting, an operetta based on the legend of Don Juan. It contained a catchy tune called ‘The Soldier of Naples’, so when a catchy disease appeared in their midst, Madrileños quickly dubbed it the ‘Naples Soldier’.

Spain was neutral in the war, and its press was not censored. Local papers duly reported the havoc that the Naples Soldier left in its wake, and news of the disruption travelled abroad. In early June, Parisians who were ignorant of the ravages the flu had caused in the trenches of Flanders and Champagne learned that two-thirds of Madrileños had fallen ill in the space of three days. Not realizing that it had been theirs longer than it had been Spain’s, and with a little nudging from their governments, the French, British and Americans started calling it the ‘Spanish flu’.

Not surprisingly, this label almost never appears in contemporary Spanish sources. Practically the only exception is when Spanish authors write to complain about it. ‘Let it be stated that, as a good Spaniard, I protest this notion of the “Spanish fever”,’ railed a doctor named García Triviño in a Hispanic medical journal. Many in Spain saw the name as just the latest manifestation of the ‘Black Legend’, anti-Spanish propaganda that grew out of rivalry between the European empires in the sixteenth century, and that depicted the conquistadors as even more brutal than they were (they did bind and chain the Indians they subjugated, but they probably did not—as the legend claimed—feed Indian children to their dogs).

Further from the theatre of war, people followed the time-honored rules of epidemic nomenclature and blamed the obvious other. In Senegal it was the Brazilian flu and in Brazil the German flu, while the Danes thought it ‘came from the south’. The Poles called it the Bolshevik disease, the Persians blamed the British, and the Japanese blamed their wrestlers: after it first broke out at a sumo tournament, they dubbed it ‘sumo flu’.

Some names reflected a people’s historic relationship with flu. In the minds of the British settlers of Southern Rhodesia (Zimbabwe), for example, flu was a relatively trivial disease, so officials labelled the new affliction ‘influenza (vera)’, adding the Latin word vera, meaning ‘true’, in an attempt to banish any doubts that this was the same disease. Following the same logic, but opting for a different solution, German doctors realized that people would need persuading that this new horror was the ‘fashionable’ disease of flu – darling of the worried well – so they called it ‘pseudo-influenza’. In parts of the world that had witnessed the destructive potential of ‘white man’s diseases’, however, the names often conveyed nothing at all about the identity of the disease. ‘Man big daddy’, ‘big deadly era’, myriad words meaning ‘disaster’ – they were expressions that had been applied before, to previous epidemics. They did not distinguish between smallpox, measles or influenza – or sometimes even famines or wars.

Some people reserved judgement. In Freetown, a newspaper suggested that the disease be called manhu until more was known about it. Manhu, a Hebrew word meaning ‘what is it?’ was what the Israelites asked each other when they saw a strange substance falling out of the sky as they passed through the Red Sea (from manhu comes manna – bread from heaven). Others named it commemoratively. The residents of Cape Coast, Ghana called it Mowure Kodwo after a Mr Kodwo from the village of Mouri who was the first person to die of it in that area. Across Africa, the disease was fixed for perpetuity in the names of age cohorts born around that time. Among the Igbo of Nigeria, for example, those born between 1919 and 1921 were known as 8ogbo ifelunza*, the influenza age group. ‘Ifelunza’, an obvious corruption of ‘influenza’, became incorporated into the Igbo lexicon for the first time that autumn. Before that, they had had no word for the disease.

As time went on, and it transpired that there were not many local epidemics, but one global pandemic – it became necessary to agree on a single name. The one that was adopted was the one that was already being used by the most powerful nations on earth – the victors in the Great War. The pandemic became known as the Spanish flu—ispanka, espanhola, la grippe espagnole, die Spanische Grippe—and a historical wrong became set in stone.

Excerpted from Pale Rider: The Spanish Flu of 1918 and How It Changed the World by Laura Spinney. Copyright © 2017. Available from PublicAffairs, an imprint of Perseus Books, LLC, a subsidiary of Hachette Book Group, Inc.