Kelvin Droegemeier could be an huge boon to the scientific community. 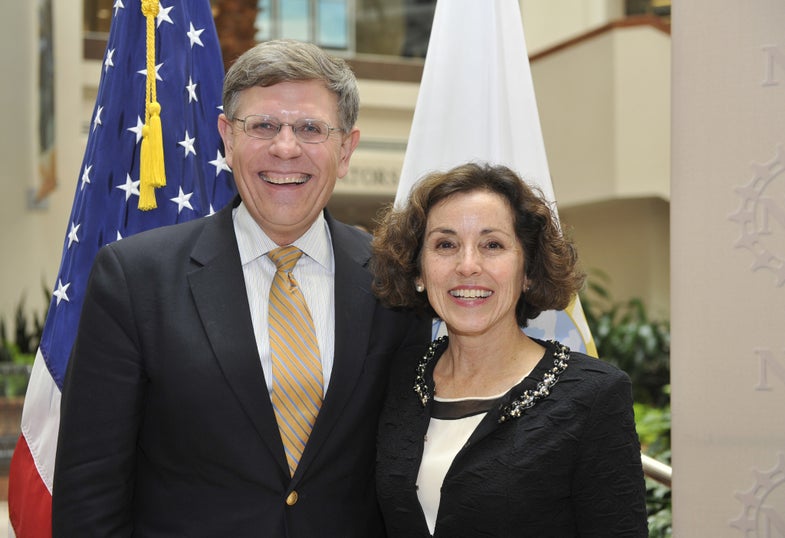 After a 19 month vacancy, President Trump has decided who he wants to lead the Office of Science and Technology Policy, according to the Washington Post. His pick is Kelvin Droegemeier, an extreme weather expert and professor of meteorology at the University of Oklahoma.

Droegemeier has political experience from working on the National Science Board, which establishes the policies of the National Science Foundation, in 2004 and 2011. He is also currently advising Oklahoma governor Mary Fallin as her secretary of science and technology.

News of Droegemeier’s nomination was praised by scientists across the country, including former chief science advisor to Barack Obama, John Holdren, who described Droegemeier to the Post as “a very solid choice.”

Droegemeier’s nomination is a timely choice considering the increased frequency of extreme weather events that the country has been experiencing, says Michael Halpern, deputy director of the Center for Science and Democracy at the Union of Concerned Scientists. “We are dealing with more instances of flooding, wildfire, and weather disasters that have all kinds of ecological and economic impact.”

Someone like Droegemeier, who has direct knowledge of climate and atmospheric science, as well as deep contacts within that academic community, would know how to advise on issues like coast flood insurance or how to reduce the impact of wildfires, says Halpern.

While Droegemeier has not publicly stated his personal views on climate change, he did support NASA director Jim Bridenstone after his Senate confirmation hearing blunder, saying that “he absolutely believes the planet is warming, that [carbon dioxide] is a greenhouse gas, and that it contributes to warming.”

The Office of Science and Technology Policy, established by Congress in 1976, provides the White House with the most current scientific advances so that White House policies are shaped by sound science and provide the maximum benefit to society. This includes weighing matters of the economy, national and homeland security, foreign relations, public health, and the environment from a science, engineering, and technology perspective.

Michael Kratsios, a political science major and former chief of staff to Silicon Valley venture capitalist Peter Thiel, has been holding down the fort in the interim, despite lacking scientific expertise.

The director can also act as the president’s immediate scientific advisor, as Holdren did for President Obama. As the chief science advisor, Holdren met with the President about twice a week on average, and as often as five or six times some weeks, he said in a May interview with Asahi Shimbun. In contrast, President George W. Bush did not grant his OSTP director John Marburger the status of assistant to the president, which some interpreted as a limit on his political influence.

It remains to be seen what kind of access President Trump will grant Droegemeier. If Droegemeier is someone that the President trusts, Halpern says, this could be an opportunity to educate the White House and explain why restrictions on science and certain bans on researchers are bad for the country.

President Trump has faced intense criticism for leaving the directorship vacant for more than a year and a half, twice as long as George W. Bush did, as well as for shrinking science agencies’ budgets and making decisions that disregard scientific evidence.

A science advisor would have helped President Trump better navigate his recent meeting on denuclearization with North Korea, as well as help him better understand the terms and repercussions of withdrawing from the Iran nuclear deal and the Paris climate agreement, says Halpern.

“We ended up pulling out of deals that were a landmark cooperative agreement among nations,” Halpern says. “It marginalizes the US on a world scale and means that we’re making decisions based on faith and not on evidence.”

It also remains to be seen whether Droegemeier will be allowed the resources to rebuild the Office of Science and Technology Policy, which has seen its ranks shrink to a skeleton crew of about 55 staff members, down from a staff of 135 during the Obama administration.

Droegemeier has staunchly defended the necessity of a robust federal budget for science and technology to keep America’s place in the scientific world.

“Due to underfunding, we risk losing an entire generation of researchers who produce these ‘miracles’ when we need them most,” he said in a 2017 op-ed co-authored in the Des Moines Register. “Balanced, predictable and stable funding for research and development — across all disciplines…is essential for the United States to remain a world leader in research and a translator of research outcomes into practical products and services that benefit all of our citizens.”