Wading in makes it a little safer 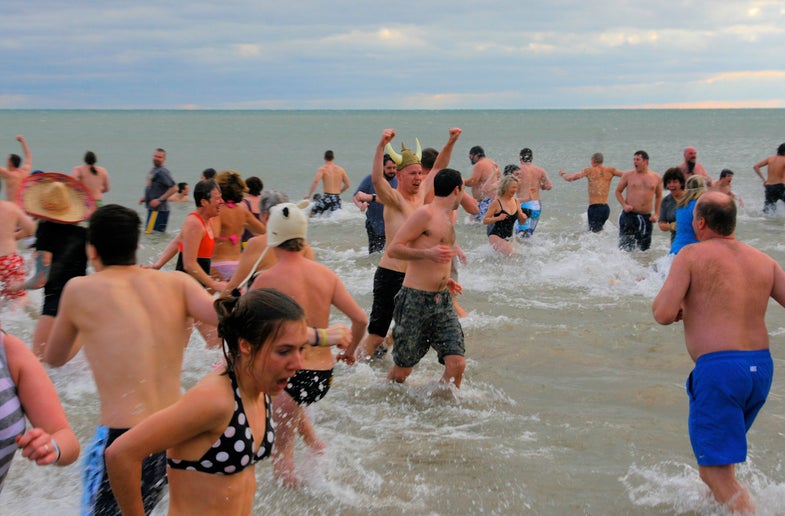 It sounds like a dumb idea: In the middle of winter, strip down into your bathing suit and leap into ice-cold ocean water. Yet every year, hundreds of thrill-seekers around the world take part in this New Year’s Day ritual. In fact, Coney Island has an entire club—the Polar Bear Club—devoted to the sport, hosting the plunge multiple times a year.

For most people, the activity is an annual tradition done simply for the adrenaline rush. But that thrill could turn dangerous or even deadly if you aren’t physically prepared for it. Here’s what happens to your body immediately after the freezing water hits your skin:

The human body isn’t exactly suited for freezing water. So as soon as you enter the ocean (or frozen lake, river, pool, etc.), you go into something called “cold-shock”, which is an involuntary response—meaning you have no control over it—that causes you to take a giant gasping breath in, says Joseph Herrera, the director of sports medicine at Mount Sinai Medical School. This can be incredibly dangerous; since you have no control over how and when it happens, it could occur when you are underwater, causing you to take water into your lungs. Depending on how much water you inhale and how long it takes you to get back to the surface, you could end up drowning.

The cold-shock response is followed by something called the diving reflex. Extremely cold water causes blood vessels in the body to constrict. This helps to maintain heat on the outer part of the body, but also makes it harder for the heart to pump blood to internal organs. In the moment, “your body starts to force blood from the limbs to the heart and brain,” says Herrera, to ensure those vital organs receive enough blood to survive.

The increased workload on the heart poses an obvious danger for those with underlying heart conditions. But healthy individuals—even those who swim regularly—can also fall prey.

Even so, countless thrill-seekers take the plunge every year. Some of them even cite supposed health benefits in addition to the excitement. Herrera says that there can be some release of adrenaline in response to the shock of plunging into freezing cold water, so the rush is real. But most (if not all) of those supposed health benefits aren’t actually backed up by science, he says. “It is thought that swimming in freezing temperatures will lead to the ability for the body to ‘harden’ and fight of disease, but this has not been proven.”

For those individuals who simply can’t live without the plunge, Herrera says, practice is perfect. The body undergoes various adaptations if trained properly for cold-water swimming, he says. As you swim for longer stretches in colder water, for example, your body is likely to develop an extra layer of fat for warmth. Dangerous reflexive responses are also minimized. On the day itself, instead of a plunge, walking slowly into the water can help to diminish the cold shock response.

But is it good for you? Herrera says swimming has numerous cardiovascular benefits, but the only potential ‘benefit’ you get from doing it in cold water is that extra layer of fat.

So if you haven’t started your training for the 2017 polar bear plunge, it’s probably best to sit this one out. You’ll just have to enjoy watching other people freeze their butts off.