This is why cutting weight is so dangerous for professional fighters 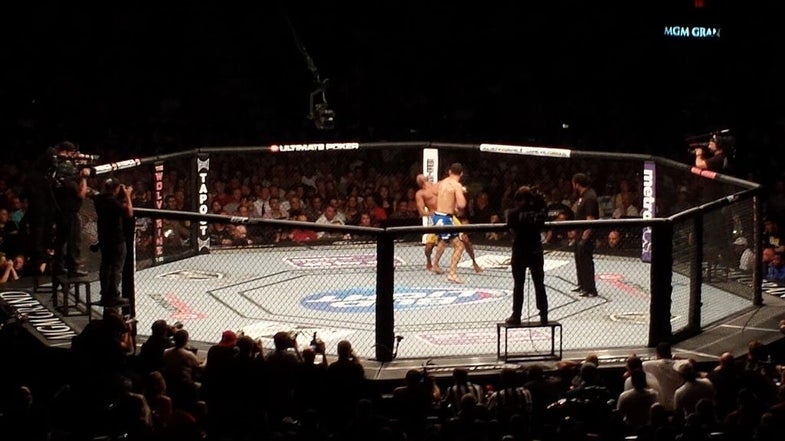 Dropping 23 pounds in 10 days sounds impossible. At the very least, it sounds like a great way to hurt yourself. And yet Ultimate Fighting Championship competitor Paige VanZant did just that. Sure, she passed out in a boiling-hot bathroom as her best friend scraped sweat off of her naked body, but she made her weight. She got lucky. Other mixed martial art athletes like Uriah Hall, who recently took a trip to the hospital after seizure hit as he tried to cut weight, show just how dangerous this drastic downsizing can be.

Hall was supposed to compete in a match on Saturday, but instead spent that day recovering from near death. It’s a great, if terrible, reminder that weight cutting isn’t some painful-but-necessary protocol. It doesn’t toughen you up as fighter. It’s just plain dangerous.

Weight-cutting isn’t exclusive to combat sports, but that’s where the practice is most common. When you get in the ring with your opponent, you generally want to be physically larger than they are. This means that within any given weight class, it’s desirable to be at the upper limit. This pressure exists in sports like boxing and wrestling, but it’s worse in the UFC, where there are fewer weight classes and weigh-ins happen at least 24 hours before the match. The set-up motivates fighters to lose as much weight as possible in time for the weigh-in, then try to recover by the next day.

When you drop pounds that fast, you’re not generally losing much body fat—you’re mostly shedding water weight. Burning off fat takes much longer. But because you’re depriving your body of a substance crucial to its survival, you end up with a host of problems. Proper hydration allows your muscles to get enough blood flow, which delivers oxygen and various nutrients, plus removes waste from the muscle cells. And on top of performance problems, athletes can risk their lives.

“The two biggest threats are decreased kidney function and heat illness or stroke,” explains Nicholas Rizzo, a past president and board member of the Association of Ringside Physicians. “Those are the main cause of deaths.”

Water enables your kidneys to filter blood and maintain proper balances of potassium and sodium, both of which are critical to cell function. Your kidneys are basically a series of membranes with blood on one side and water (later: urine) on the other. The body gets potassium, sodium, and lots of small molecules of waste to move across those membranes by creating what’s called a concentration gradient. If there are lots of, say, sodium atoms on side A and not many on side B, the sodium will move towards side B to balance the everything out. That’s pretty much how your whole excretory system works. So if you deprive your body of water, you can’t get enough of a gradient to filter your blood.

Long-term kidney impairment eventually leads to damage, and that damage can kill you—if the heat doesn’t get you first.

Sweat is, as you might remember, how humans cool themselves off. We are constantly getting rid of heat from our bodies, even when we don’t feel like we’re actively sweating, and we can only do that because we have water to spare to evaporate into the air, taking our body heat with it. In a sufficiently dehydrated state, you stop being able to cool off. Some fighters have gotten heat illness, heat stroke, or even died from overheating.

And even the fighters who successfully make weight face secondary problems, Rizzo says. “If you enter a fight and you’re dehydrated, you’re more likely to be injured. You’re putting yourself at significant risk.” An estimated 39 percent of MMA fighters enter the ring dehydrated because they simply can’t recover all that lost water in time. “This is a really important point,” says Rizzo. “They can recover to some degree, but the analogy I give fighters is that your body and muscles are like a sponge. It’s easy to squeeze out a wet sponge, but when water goes back in, it goes at the sponge’s rate. You can’t force water into it.”

Some athletes once opted for intravenous fluids in an attempt to rehydrate faster, but that method is now banned—it’s considered a form of doping. And just drinking water won’t get you back to peak performance in just a day.

There’s also some evidence that dehydration puts you at higher risk for concussions and other brain damage. That means fighters may be entering the ring—where they’ll get hit in the head repeatedly and possibly knocked out—more prone to serious brain injuries.

Rizzo thinks one crucial solution is to stop having single weigh-ins 24 hours in advance. The National Collegiate Athletic Association now has a weight certification program for wrestlers that takes body fat measurements while athletes are hydrated, then calculates what weight is safe for them to drop down to. The certification ensures that an athlete’s attempted weight loss is medically acceptable, and a weekly competition schedule means someone is always checking in on their size. But, Rizzo notes, professional combatants compete a lot less—potentially only every few months—so they don’t have constant weigh-ins to keep them honest.

A certification program like that could work for the UFC, especially if combined with a day-of weigh-in to fight against wild fluctuations. Any fighter who gained back 15 pounds of water weight between the official weigh-in and match day would be eliminated from competition. The testing is cheap, and if the NCAA can do it for every wrestling program, the UFC can certainly do it for their fighters.

There should probably be different weight classes, too. Right now, they’re distributed wrong. For example, there’s 125-135, then 135-145, 145-155, and so on, with the bizarre heavyweight category holding everyone from 205-265 pounds. But Rizzo says this isn’t the right way to categorize people by weight. Weights fall on a bell curve, albeit an uneven one for elite fighters, so it makes no sense to have 10-pound increments. If most athletes fall between, say, 135 and 155 pounds, there should be more divisions within that area. You’d be dividing up so that there were equal numbers of people in each section. That would mean smaller weight divisions in the middle, where the most fighters are, and therefore less weight cutting.

These changes, combined with education for the fighters and trainers about healthy weight loss practices, are what Rizzo would like to see to keep athletes safe.

This is especially important in a sport where you’re already putting yourself in harm’s way. A dehydrated basketball player will probably just perform sub-optimally. But a dehydrated fighter is different. Some of the UFC athletes are naturally just a few pounds above a weight class limit, so they may only have to drop a few pounds of water weight to make the cut. One of these lucky souls might be up against someone who had to lose 15 pounds in a week, and pitting one against the other makes it more likely that the dehydrated combatant will take a nasty punch to the head.

It’s a sport where you don’t just lose—you get the crap kicked out of you. And when athletes are already incapacitated by dehydration, they’re just setting themselves up for injury.