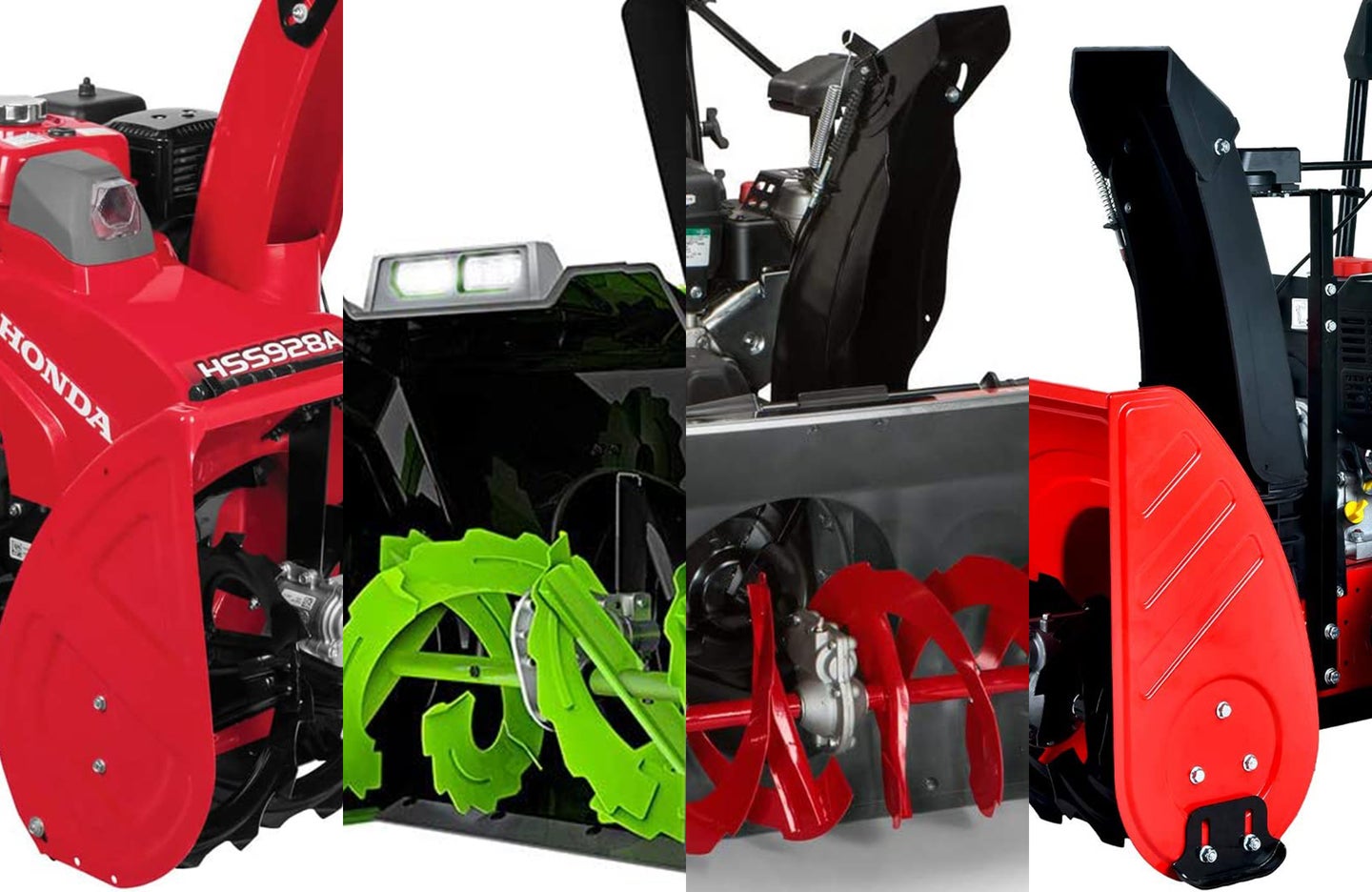 Cut through the snow, not your driveway.

You might be avoiding snow blowers for gravel driveways because you’ve heard they’ll kick up rocks and damage your property. At the same time, shoveling out your entire driveway probably sounds like a horrid chore. The answer is a two-stage or three-stage snow blower, capable of skimming across the top of your driveway, removing the majority of snow while leaving your driveway intact. If you feel like picking the right machine for the job has you between a bunch of rocks and a hard place, we’ve made it easier with our list of the best snow blowers for gravel driveways.

How we selected the best snow blowers for gravel driveways

Things to consider before buying snow blowers for gravel driveways

While the number of stages is the most important thing to consider when buying a snow blower for gravel driveways compared to one for other use cases, there are other important things to consider before buying such a large, complicated piece of equipment:

At its most simple, we can describe the stage amount as the number of steps and parts used to chuck snow elsewhere. The most important distinction for users wanting to blow snow off the tops of gravel driveways is separating 1-stage and higher-stage snow blowers.

The 2-stage and 3-stage snow blowers, meanwhile, are made for gravel driveways. A large part of this is the addition in most models of skid shoes, which force the machine slightly off the ground. The result is a skimming-off-the-top effect, leaving just a thin layer of snow atop your undisturbed gravel. The main bonus of a 3-stage over a 2-stage is the addition of an accelerator that can help with harder, refrozen snow.

Regardless of how handy you are, a bit of help putting together a several-hundred-pound machine can be quite useful. This assembly can also ensure that the skid shoes—the part of the snow blower that raises the machine up to not eat your gravel—are attached properly. As a bonus, the cost of getting expert assembly is typically quite cheap. For example, the EGO SNT2400 has an expert assembly option that adds less than 5% to the overall cost of the machine. That being said, be sure to discuss the details with the service provider, as there is usually a clause that allows for an updated estimate based on the complexity of the machine.

Picturing your heavy-duty snow blower tossing snow out of your path sounds great as the season approaches, but will you be happy with a large and ultra-heavy machine sitting in your garage all year? Be careful and imagine setting a box with the weight and dimensions of your new product in your shed for a full year. Are you going to be using it enough during the viable season to make it worth having it from spring to fall as well or is it going to be weighing you down more than the full utility that it provides?

Why it made the cut: This heavy-duty snow blower by Honda has the power to get big jobs done.

The top of our list belongs to Honda Power Equipment for its sheer power. This beast of a machine can handle 1,900 pounds of snow a minute, with a 28-inch wide clearing opening. Keeping on your gravel driveway should be relatively easy with the tank-like treads on the back two wheels. Be sure to install skid shoes on the bottom of the front section to give your snow blower some lift, but also be aware that the height of the Honda Power Equipment’s auger (the part that gets rid of the snow) is adjustable.

You can also take advantage of the offered expert assembly, which will be especially useful since the Honda Power Equipment snow blower weighs over 350 pounds. I understand this weight, alongside the hefty cost, is going to turn some heads, but the overall efficacy of the Honda Power Equipment and advanced height adjustment earns it its slot at the top of the best snow blowers for gravel driveways.

Why it made the cut: The EGO SNT2400 is one of the few fully electric stage-2 snow blowers that can compete with a gas-powered snow blower.

Our best electric snow blower for gravel driveways comes in the form of the EGO SNT2400. This product really outshines its gas-powered competitors in that it isn’t churning out noxious fumes into the air while also staying quiet in the mornings to not wake up the kids and neighbors.

The EGO SNT2400 uses arc lithium batteries to deliver the power of gas without all of the environmental downsides. The batteries also give you the chance for a completely electric but also cordless snow blower-for-gravel-driveways experience.

Unfortunately, the EGO SNT2400 does not come with the batteries and charger. This does, however, give you some choice and flexibility in what you’re getting, as well as save you some money if you’re an electric fan that already has the needed batteries for other EGO Outdoor Power Equipment. For this model, EGO recommends using two of the 56V ARC Lithium batteries, with the 7.5 Ah model being able to clear an 18-car driveway in a single charge.

Why it made the cut: The Cub Cadet is the most accessible 3-stage snow blower on the market.

When things get rough, such as when you get refrozen snow regularly, it becomes time for a 3-stage snow blower. These hardy snow blowers have an accelerator that pushes through into the heaviest and wettest of snows, giving you the power to get the job done. The Cub Cadet 3X 28” provides this power as one of the most accessible options to the general public.

Cub Cadet also makes the experience quite comfortable. Heated grips make using the machine palatable even during damp and frigid snowy mornings. You also won’t have to become overly worried about sideswiping your vehicles in those dark Northern mornings due to the high-quality headlamps the Cub Cadet possesses.

The Cub Cadet 3-stage doesn’t come with expert assembly, but you should be able to assemble it yourself in about 30 minutes. The main part of the machine will come pre-assembled in the box, leaving minimal work to you.

Why it made the cut: The Briggs & Stratton snow blower offers a lot of flexibility and ease in snow chute control.

The Briggs & Stratton 1696619 is yet another gas-powered snow blower operating on two stages. What sets the Briggs & Stratton apart from other snow blowers for gravel driveways is the high level of precision it gives in chute control via the control panel. It can rotate 200 degrees from left to right solely from dials at your fingertips. While more complex chute rotations might be viable on shorter driveways, you’ll be thankful for the flexibility along long driveways where different segments of the path will probably require different chute angles.

Another perk of this model is the powerful Briggs & Stratton 1150 motor that is qualified to work all the way down to -20 degrees Fahrenheit. As part of the “Our Starting Promise” deal, Briggs & Stratton will fix your engine for free if your snow blower fails to start due to cold weather warmer than this point.

Getting the expert assembly option for the Briggs & Stratton is totally recommended as the instructions, even for those used to assembling store-bought products, come across as a bit arcane and are overall somewhat difficult to parse. Still, take a moment and look through the manual yourself before making a decision.

Why it made the cut: PowerSmart has provided us with a fully powered 2-stage snow blower for under $800.

Finally, we have a 2-stage snow blower from PowerSmart. Despite being budget, the PowerSmart is tough enough to get through some pretty difficult snows thanks to a clearing height of up to 21 inches at full 2-foot width. It uses a 212cc standard gas engine with a corded electric start.

What the PowerSmart lacks in premium features, such as headlights or heated handles, it makes up for by being a solid unit that won’t break the bank. You’ll also notice that sticking to the essentials gives makes the PowerSmart comparatively lightweight at only 143 pounds. Where most units are considerably heavier than me, there’s a lot of comfort in working with a machine in the slippery snow that is more comparable in weight.

The PowerSmart features a 180-degree rotatable chute. While, in theory, this rotation should be under your control, consumer reports mention that the chute can have a mind of its own from time to time and change its aim. This is particularly noticeable in bumpy terrain. Still, you should be able to get it back under control quickly if you are attentive.

Q: How much does a snow blower for gravel driveways cost?

A snow blower for gravel driveways can cost anywhere from below $800 to over $3,000. More complex models and, oftentimes, 3-stage snow blowers are likely to cost more than the rest. It is really important to evaluate how often you are really going to be using a snow blower when buying one for gravel driveways due to their high cost. Alternatively, consider budget models like the PowerSmart Snow Blower 212cc, which can pay for themselves after just a dozen or so uses.

Q: Can any snow blower be used on gravel driveways?

Final thoughts on the best snow blowers for gravel driveways

Getting the best snow blowers for gravel driveways is easy once you’ve figured out the need to have a 2-stage or 3-stage snow blower at a minimum. The snow blowers presented on this list should appeal to anyone wishing to get something to make the winter more bearable, with the Honda Power Equipment HSS928AATD being a particularly strong choice.