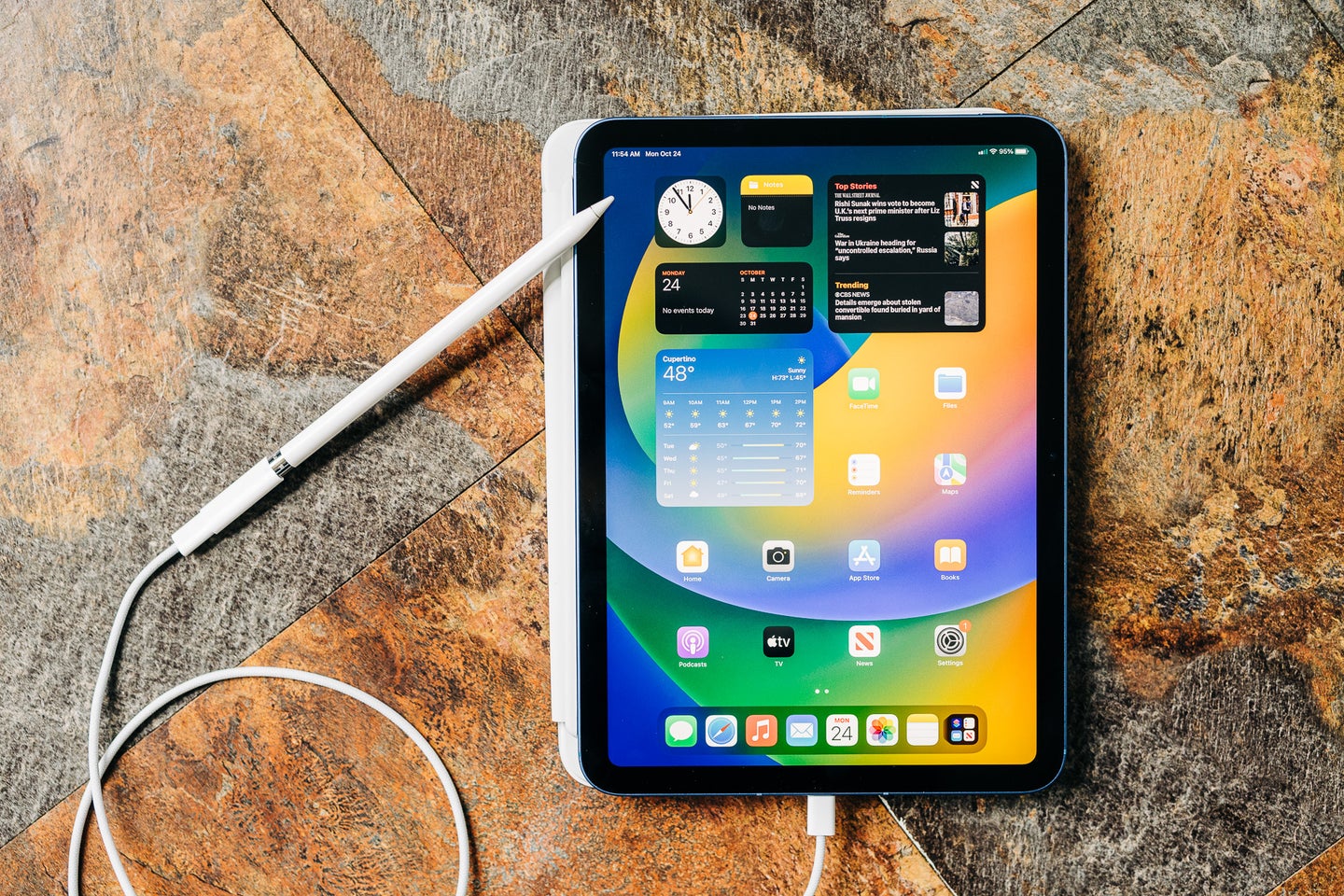 You'll have to plug in the pencil to charge it—one of the 10th-gen. iPad's little idiosyncrasies. Stan Horaczek
SHARE

Change can be hard, especially when it comes to devices many of us use every single day. Apple’s new standard iPad has just undergone one of its biggest evolutions so far. And while the transformation introduces some notable design and performance upgrades, it also opens the door to a few growing pains, particularly when it comes to price and Pencil support. I’ve spent roughly a week with Apple’s new 10th-generation iPad and it’s undeniably great, but it suffers from a real case of middle-child syndrome.

What’s new in the 10th-generation iPad?

Until now, the standard iPad has embraced the original design with tapered edges and a Touch ID-equipped home button below the screen on the front of the device. The 10th-generation iPad moves to a more modern setup with no home button and squared edges to closer emulate the upmarket iPad Air and iPad Pro. Losing that front-facing button leaves room for more screen, giving the 10th-gen. model 10.9 inches of usable screen compared to 10.2 in the previous version.

The 10th-gen. iPad’s front-facing camera also now resides along the long edge of the display, where it should be. That’s particularly huge when using the iPad in a keyboard case for video calls. It finally fixes the awkward issue of looking off to the side during Zoom meetings because of the awkward camera placement. Not even the Air or Pro can do that in their current iterations.

Big for its britches

In a vacuum, all of these iPad design upgrades are great. They make the device feel much more modern during use and it improves the overall feel. The new form factor also introduces some growing pains. Despite the fact that it’s extremely similar in size to the iPad Air or the 11-inch iPad Pro, none of the cases for those devices will work with the newest model.

Apple offers a Smart Folio, as well as a Magic Keyboard Folio specifically designed for the new 10th-gen. iPad. The Smart Folio offers a very standard iPad experience with a simple folding cover that lacks a keyboard. It works like so many versions of the same product before it, which is to say seamlessly and elegantly.

It’s also slightly odd that the new iPad lacks a headphone jack. That’s a very odd omission if Apple is trying to make this model as accessible as possible. Many schools that use iPads, for instance, also rely on cheap earbuds and headsets that won’t work with this model unless they’re paired with an optional dongle. It’s an odd choice.

The Magic Keyboard Folio is a more interesting and considerably more expensive option. At $249, it’s more than half the price of the iPad itself. It includes a back plate, as well as a keyboard (with a touchpad) that doubles as a cover. Because the keyboard isn’t permanently attached, it’s simple to remove when holding the iPad like a book or setting it on a desk to simply watch some content or play games.

While I enjoy the overall Smart Keyboard Folio experience, it does have a few downfalls. It doesn’t provide any protection for the edges of the device and the flexible hinge allows the keyboard to move around too much when the cover is closed. But, typing on the Magic Keyboard feels excellent and the whole package works seamlessly and easily.

Because it looks so much like an iPad Air, you might expect to see an Apple Pencil 2 attached magnetically to the side of the 10th-gen. iPad. That’s not the case. The new standard iPad still works exclusively with the original Apple Pencil, which doesn’t allow for magnetic charging.

Despite its reliance on an older Pencil, the 10th-gen. iPad offers a solid drawing and writing experience. It’s responsive and accurate enough for high-level work. I did some tedious photo retouching with it and had no problem with misalignment or lag.

Things get a bit awkward when it’s time to charge. The new iPad offers a USB-C charging port, which makes the original Pencil’s integrated Lightning jack useless without an optional dongle. With help from a charging cable, you can use the Pencil while it’s connected to the iPad, but it’s an inelegant solution. It’s great to keep support for the original Pencil intact because it’s a pricy peripheral and there are literally millions of them still out there. Still, the charging process feels very clumsy compared to iPad’s slick design and generally intuitive experience.

Upgrading from the 9th-gen. model offers the extra screen real estate, the updated design, the Touch ID via the power button, and access to the slick new Magic Keyboard Folio. The 10th-gen. model also upgrades the chip inside to the A14 Bionic, which is one generation newer than the A13 Bionic found in the previous model. Whether or not those upgrades warrant a $150 premium will vary from user to user.

The discussion gets more interesting when comparing the 10th-gen. iPad to the iPad Air. The Air has a noticeably superior display thanks to the lamination and anti-reflective coating. Those two variables make a huge difference when you’re using the iPad out in the world. Reduced glare makes the screen visible in more settings without having to crank the overall brightness. That helps preserve battery life.

The Air’s M1 processor also offers a considerable performance boost compared to the standard iPad, but many users may not even notice it. The extra horsepower makes itself known during resource-intensive activities like video editing or playing games. Users who don’t partake in those activities all that frequently may not really notice a difference.

For those who rely heavily on the Pencil, upgrading to the Air likely makes sense. Magnetic charging is vastly easier and it drastically cuts down on opportunities for the Pencil to simply roll away when not in use. I know this because I spent five minutes of my 10.9-inch iPad review process fishing around under the couch for the Pencil.

The verdict so far

After just a week with the new 10.9-inch iPad, I’ve been both impressed and slightly confused. The design changes are excellent and I hope every iPad from here on out keeps the front-facing camera on the long edge of the screen like it is here. This iPad is also fast enough to handle almost any task you want to throw at it unless you’re doing extended sessions with resource-intensive games or serious production work.

The price still seems a bit high considering this device’s place in the lineup. That issue grows exponentially once you start adding accessories. A 256GB iPad with a Smart Keyboard Folio and a Pencil will cost you just under $1,000 (can’t forget the $9 for the Pencil charging dongle). That’s serious cash for a device that will eventually occupy the entry-level slot in the iPad lineup.

Overall, the 10.9-inch 10th-gen. iPad is extremely solid and fills a real hole in the iPad lineup. Just make sure you understand the quirks before forking over that credit card.