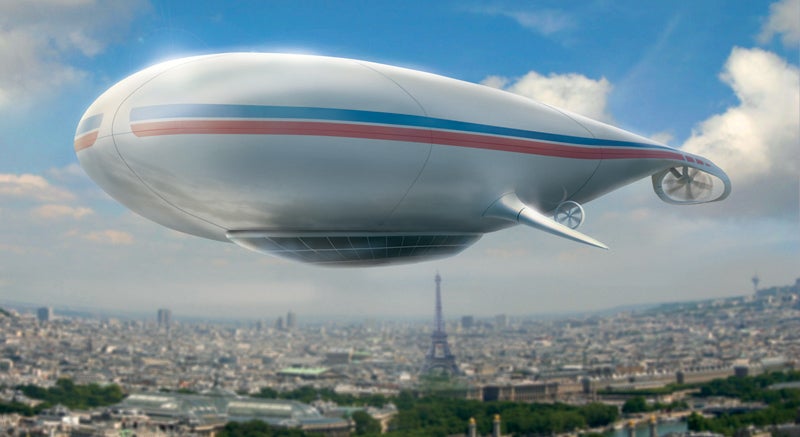 Most of us fly for speed, but French industrial designer Jean-Marie Massaud believes that slow cruising in an airship could be the next step in air travel. Massaud has sketched airships since the age of five, he says, and has since collaborated with major brands like Yves Saint Laurent and Yamaha to design, respectively, perfume bottles and submarines. Now he’s partnering with Onera, France’s space agency, to create the world’s first luxury airship. The design of the Manned Cloud calls for a double-decker, 5.6-million-square-foot airship shaped like a whale. Boasting a top speed of 105 mph and outfitted with all the amenities of a cruise ship, it would ferry 55 passengers from Paris to Madagascar in four days, offering a turbulence-free, unpressurized flight at an altitude of a mere 9,800 feet.

The Manned Cloud will feature panoramic views and a posh interior.

Intrigued by Massaud’s spaceship-like design and the possibility of a new aeronautics market, Onera has been testing the aerodynamics and flight-control capabilities of a scale model for the past year. This spring, the agency recommended a slightly less grand version of the airship, capable of carrying 15 passengers and traveling at 80 mph. Massaud hopes the new design will attract the attention of private investors, from whom he aims to secure as much as $15 billion to begin building the Manned Cloud, with a sail date of 2020.

Hull
A 2.6-million-square-foot hull filled with helium keeps the airship aloft. A de-icing device protects the ship from cold weather, while side fins provide maneuverability and stability.

Tail
The tapered tail optimizes aerodynamics by minimizing drag and controlling airflow over the hull.

Ballast
As the airship burns fuel and becomes lighter, pumps inject outside air into the hull. The added weight helps keep the airship from ascending to dangerous heights.

Interior
Onera’s design can comfortably carry 15 passengers in its underbelly. The spacious two-story cabin will include a restaurant, library, fitness room, spa, and furniture created by Massaud himself. Keeping weight to a minimum is critical to the blimp’s success, so to reduce water consumption, passengers will only have access to showers—no bubble baths or Jacuzzis.