A Looking Back Exclusive: Inside ENIAC 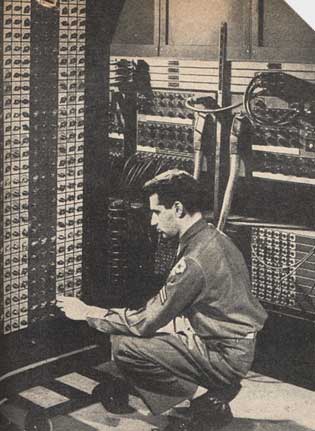 A maintenance engineer adjusts one of the ENIAC’s portable function tables. The table here is being used to assist the computer’s main mechanism in solving a problem; it is hooked into the two panels at right through bronze-encased cables, seen above the operator’s head.

You walk through a chamber and find you’re suddenly hemmed in by trays, dials, and cables. Along the walls are arrays of panels and switchboards with arcane buttons, lights, and sockets. Wires are everywhere.

You’ve entered the computer room. Not the room where they keep the computers, but the room that virtually is the computer. You’re thumbing through the pages of Popular Science in the 1940s, where we lead you step by step through the innards of gigantic devices that, we solemnly intone, will change the world.

Even though the technology behind ENIAC (Electronic Numerical Integrator and Calculator), the world’s first all-electronic computer, is roughly equivalent to that of one of today’s wristwatches, we were correct: These behemoths were the first steps in the computer revolution that has changed the way we live. And only by looking at such godzillas can the startling advance of computing technology in the latter half of the 20th century be put in perspective.

Standard in our coverage of computers like ENIAC, Mark I, and Mark II were details on the total mileage of wiring in the computer, number of tubes, and the time required for what at that time were lengthy computations. These specs seem quaint today. Here’s a bit of what we said about ENIAC, created by John W. Mauchley and J. Presper Eckert Jr., at the Moore Electical Engineering School of the University of Pennsylvania.

Mauchley and Eckert have designed and built, with an assist from Army Ordnance, the world’s first all-electronic computer. The speed and scope of this digital wizard will revolutionize methods of modern industrial design. It is expected to put mathematics back into industry as an economical, rapid tool, saving months of figure work and accomplishing part of the presently impossible.

The plane, rocket, or wing in which a passenger may travel well over 1,000 miles per hour is now just a ghost on a blueprint. Engineers at Republic Aviation Corp. say it is hidden somewhere under a huge mass of highly complicated mathematical equations. The engineers believe that those equations must be completely analyzed before any promises can be made about supersonic speeds. The ENIAC has made complete mathematical analysis of that kind feasible for the first time.

This would have been the first problem fed into the ENIAC if the war had not ended when it did. The 30-ton numerical monster would have turned out all the answers in 130 hours. No other machine in existence could have done it in less than a year.

The ENIAC is 1,000 times faster than its best-known predecessor, the mechanical computer built for the Navy and installed at Harvard by IBM. It is now housed in a 30- by 50-foot room, ventilated to draw off the heat generated by its 18,000 electronic tubes. Forty panels cover three sides of the room with switchboards.

The machine has 20 accumulators, the panels that add, subtract, and “remember.” Three function tables of two panels each also contribute to this memory. By means of these panels, entire series of trigonometric functions, for example, may be applied at electronic speed to any numbers in the machine. There is one panel that does the dirty work of division and square root. The other panels contain the initiating unit, where the first button is pushed; “programmers,” which police the circuits and permit any variations of the basic operations; and the cycling unit, which sends out 5,000 pulses per second. . . .

As a commemorative reenactment of its first public demonstration, ENIAC was fired up once again on Feb. 14, 1996. The celebration was part of the 50th birthday activities of the Association for Computing Machinery.