When someone glances over your shoulder, all they'll see is scrambled text 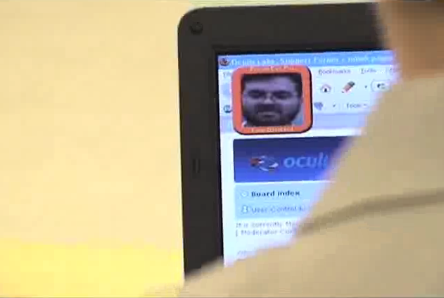 The dropping price of laptops and netbooks has resulted in a proliferation of computer use in public spaces. Whether at the airport, in a cafe, or on the Chinatown bus, more and more people are using their computers in the view of others. This has made protecting personal data from eavesdroppers a high priority. Sure, a couple of dollars can get you a polarized screen that offers some protection from the wandering eye of the person next you, but for people with sensitive military, industrial, and intelligence information on the screen, that simply isn’t enough.

The programs, PrivateEye for general use and Chameleon for extra protection, utilize the camera embedded in most computers these days. Both programs take a snapshot of the user’s face when he’s working on the computer. Whenever the user looks away, the programs scramble the image on the computer, making it impossible to read anything. That way, whether the user gets up to get a cup of coffee or just looks away for a second, the security of the screen is never compromised.

Sure, for most of us, privacy mostly means preventing strangers from seeing stupid Facebook pictures or embarrassing browser history. But for those who really need to make sure their screens are safe in public, this software keeps out nosy neighbors and deliberate spies alike.

[via the Baltimore Sun]