Using a tiny server crammed into a wall wart, the $100 PogoPlug turns any hard drive into a network-attached storage device 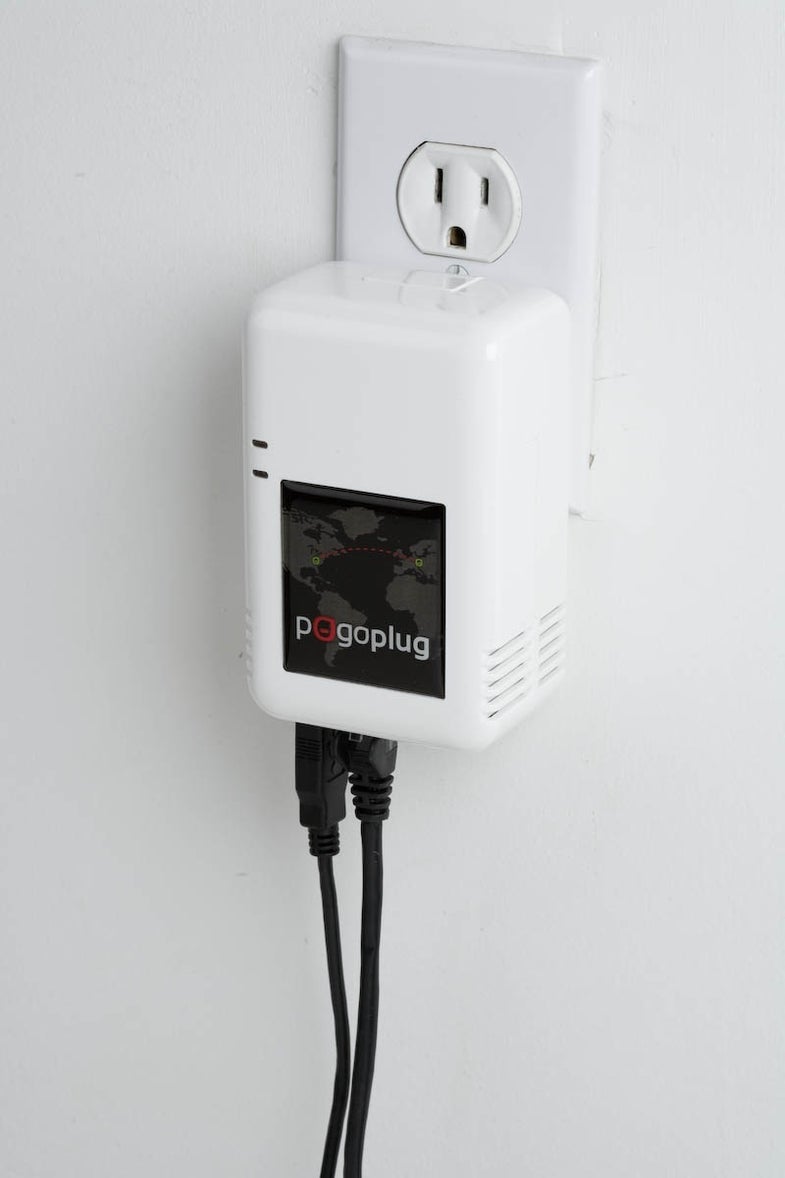 What is network-attached storage, you ask? It’s any device that makes a hard drive available on a network and/or the Internet. Having a network-attached storage device means you can: access all your music, movies, and critical documents, no matter where you are; back up your important files to a single location; and share all your photos, media, and anything else with friends — without the intervening step of uploading them to YouTube, Flickr, etc.

Here’s how it works.

The PogoPlugis $99, and no bigger than the wall plate for a light switch. It resembles an oversized wall wart (like the one hanging off the end of your cell phone charger).

By design, it’s dead easy. You plug it into the wall, and into your home router via an ethernet cable, and then into an external USB 2.0-compatible hard drive (or even USB thumb drive) which you’ve probably got sitting around anyway (and if you don’t, they can be had very cheaply).

Go online, register your PogoPlug, and voila —  the drive connected to the PogoPlug is now accessible via my.pogoplug.com. No setting up IP addresses for your home server, or tunneling through your firewall, or needing a spare computer to use as a media server —  all of that is taken care of by a combination of firmware in the PogoPlug and an independent back-end service running on Cloud Engine’s own servers.

And this is what it does.

Aside from all the things that any network-attached storage device is capable of, the PogoPlug does a number of nifty things, including automatically generating thumbnails for your media and transcoding video on the fly so that it can be streamed to remote devices without you having to wait for the whole thing to download first.

There’s even an iPhone application in case you want to, say, access to every vacation photo you’ve ever taken, ever. Or swap out your tired playlist for some new music, even if you’re in Aruba and your hard drive is in Saskatchewan.

Sharing files with friends is even easier —  you just punch in their email address and the PogoPlug software emails them a link; they don’t even have to register. There’s no backup software specific to the PogoPlug, though, which, unfortunately, means backing up is still a drag-and-drop operation.

Because it’s based on the ultra-low-power Marvell chipset (Marvell works with the same ARM chips that show up in cell phones and portable gaming devices like the Nintendo DS), the PogoPlug draws fewer than 5 watts of power. Most external hard drives are smart enough to turn themselves off after a pre-set period of inactivity, so together the two devices aren’t going to draw a lot of power unless you’re hitting the server all day long —  even then, it’s a lot less than the 20-100 watts that would be required to run a full-blown laptop or tower-based server.

If you want to get really crazy, Cloud Engine’s engineers have apparently created an API for the PogoPlug. This means you could access it from any other website, thus making it a DIY media server. However, that would mean that your home or apartment would then be a DIY colocation facility, which is fine if you’re sharing baby pictures but not so great if you’re hosting business-critical files. Either way, it’s nice to have the versatility, and it probably means hackers will come up with a number of cool, off-label uses for the device.