Universal Phone Charger — So What?

The Grouse thinks the world-saving new standard isn't so hot 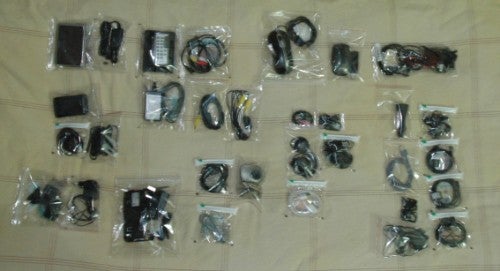 In February, seventeen of the world’s biggest, big-boy cell phone manufacturers got their Voltron on, banding together under the flag of the GSMA (Groupe Speciale Mobile Association) to promise universal handset jack-ability by 2012. Ever since then, I’ve read countless articles by tech writers praising this announcement and heralding it as the long-overdue end to that proverbial bottom drawer full of old, outdated chargers we all supposedly keep. But I’m not drinking the GSMA’s Kool-Aid.

I myself have dedicated past columns to the subject of universal gadget charging, and I definitely lay claim to a rat’s nest of old cables, connectors, and chargers lying dormant in a drawer somewhere. So why am I not impressed? Because I don’t think the GSMA announcement amounts to much of anything. I don’t believe some of the claims it makes, I don’t think it’s going to make my life much easier, and I certainly don’t see an end to the cable salad I’m forced to hump around with me wherever I travel.

Perhaps this is an easy potshot to take, but my first problem with the 2012 initiative, which has knighted micro-USB as the juicer or choice, is that Apple isn’t signed on. Granted, the iPhone only accounts for little more than one percent of the entire smartphone market today, but we’re talking about a product that’s just a year and a half old. By 2012, who knows what kind of growth we’ll see — triple? 10X? Even if it never gets that high, the iPhone will always remain the industry trendsetter, and not being compatible with it seems, well, out of fashion.

Another beef I have with the new universal connector is that not even all of the companies involved are 100-percent signed on. The GSMA announcement states, “The group agreed that by the 1st January 2012, the majority of all new mobile phone models available will support a universal charging connector.” The “majority” referred to here is not of all cell phone manufacturers, but a majority of the cell phone manufacturers backing this initiative. So, if even these companies aren’t going all-in on micro-USB, how universal will it ever really be?

The GSMA’s declaration of universality also states that, “with potentially 50 per cent less chargers being manufactured each year, the industry can expect to reduce greenhouse gases in manufacturing and transporting replacement chargers by 13.6 to 21.8 million tonnes a year.” It goes on to say that this reduction will lead to, “the potential elimination of up to 51,000 tonnes of duplicate chargers [in our landfills].” These numbers are optimistic at best, grossly inflated at worst. 50 percent fewer chargers manufactured? C’mon. This assumes that every single GSMA manufacturer will produce two different SKUs for each cell phone they make: one sold with a charger and one without. Does the GSMA really expect manufacturers to spend the money to do that? I don’t.

But what bothers me most about the GSMA initiative and the positive reception it’s been welcomed with is that I think people are missing (or choosing not to see) its obvious shortcomings. Even if you’re someday able to buy a new phone without a charger, this does nothing for you if you forget to pack your micro-USB cable when traveling. Yes, you might be lucky enough to be jetsetting with a friend who also happens to own a GSMA-member phone, but more than likely you’ll need to shell out for a new micro-USB cable that you’ll just shove in a bottom drawer once you get home. And what about the longevity of micro-USB as format? If I buy a GSMA phone in 2012 and replace it with another GSMA phone in 2014, maybe I’ll be spared the purchase of one extra charger. But who’s to say micro-USB will even be around in 2016 or 2018 when I buy my next phones? Who’s to say we’ll be charging with wires at all in the near future?

Then there’s that bottom drawer full of old cables. Yeah, I’ve got some vintage stuff in there I’m hoping I’ll someday find a use for. But mostly the drawer is filled with chargers for gadgets I actually use and travel with. If I were in the habit of traveling with 10 phones on me at all times, then yes, micro-USB would certainly cut down on a lot of clutter. But I travel with one phone, often accompanied by a laptop, a Nintendo DS, a digital camera, a PMP and an electric shave razor. Micro-USB won’t help me there. I still have to remember to pack a charger for each and every one of those electrical thingamajigs. Now, a universal charger that would allow me to pump voltage into all of those things — that would be an announcement to get psyched about.

I think the GSMA’s micro-USB initiative is a nice start, but it’s not much of a solution to our cable-lugging, charger-replacing woes. That said, even if the environmental implications have been exaggerated a tad, anything that lessens our impact on the Earth can’t be too much of a bad thing.