A builder rocks out with a servo-motor-controlled ax 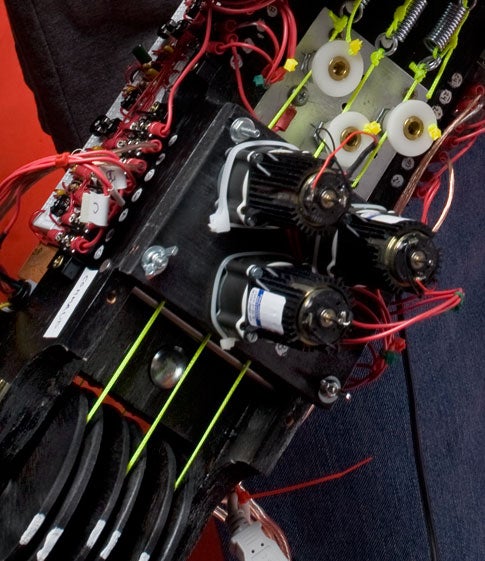 When Keith Baxter asked a salesman at a Milwaukee sporting-goods store for something stronger than 60-pound line, he wasn’t dreaming of big fish. He was hoping to catch a face-melting solo—he needed the line for his PC-controlled, motorized guitar.

Baxter set out to build a different kind of guitar because he found the real thing too tough to learn. His solution: Automate the chords, and cut out the tricky finger work. That meant finding a way to quickly and accurately change the tension of the strings to match the proper notes, without having to press on the fingerboard. After trying other methods, he set three motors toward the back of the guitar. Each one pulls on a piece of fishing line. The lines in turn yank on springs tied to regular guitar strings. To change chords, he punches buttons on a keyboard, sending a signal to his computer, which then directs the work of the motors.

Baxter says that, if played correctly, the 20-pound beast sounds just like a normal electric guitar. It might not impress Clapton, but its intricate design would make an engineer gently weep.

The H2Whoa Credo: DIY can be dangerous. We review all our projects before publishing them, but ultimately your safety is your responsibility. Always wear protective gear, take proper safety precautions, and follow all laws and regulations. 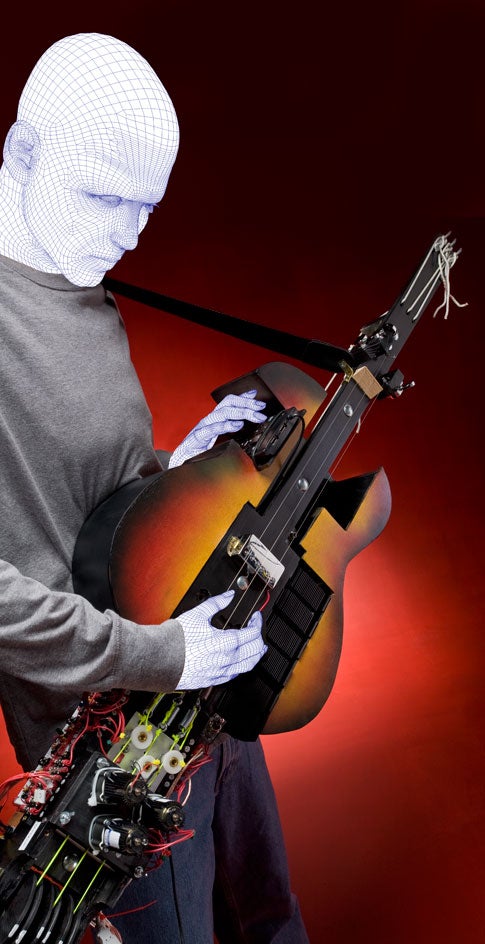 The guitar has only three strings. Rather than manipulating them on its neck, Baxter selects the chords he wants to play with a numeric keyboard attached to the side, which sends a command to his PC, via a USB cable, when he presses a button. He wrote software that matches each number to the string tensions corresponding to a given chord. The software routes these settings back to the guitar through a circuit board, and the motors instantly adjust the tension of the strings accordingly. In the future, he hopes to replace the setup with an onboard computer.

Like a regular electric guitar, this one plugs into an external amplifier. The guitar’s software allows Baxter to program different settings for different musical styles. He can use all rock chords one minute, then switch to slide guitar the next.

“No guitars were harmed in the creation of this project,” Baxter jokes. He built the frame from plywood. It proved too flimsy at first, though—the neck bent as the motors pulled the strings tight, changing the tuning—so he added a one-inch steel pipe to the back to keep it stiff. 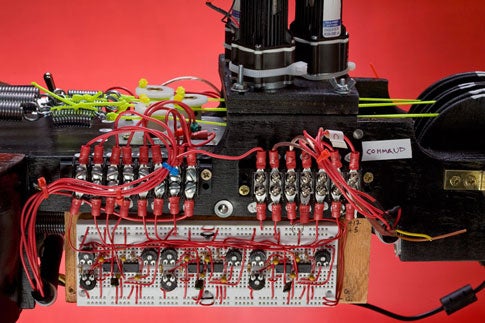