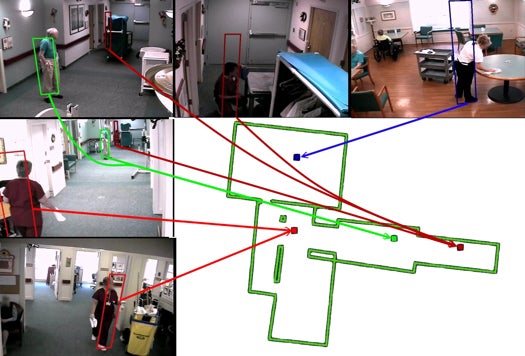 Using security cameras and algorithms, researchers at Carnegie Mellon created a nursing home monitoring system that “located individuals within one meter of their actual position 88 percent of the time.” That’s great news for people who want to be monitored all the time. For people who prefer to go about their business unobserved, it’s another step toward a perfectly tracked future.

The system was inspired by the person-tracking Marauders’ Map featured in Harry Potter books, and it’s called multi-camera or multi-object tracking. Previous attempts at multi-object tracking have had limited success, accurate either one third or one half the time. But those systems were tested in tightly controlled labs. Carnegie Mellon decided to try a more organic environment. A nursing home is a great testing environment, the researchers say: cameras already exist and have to deal with realistic obstacles like inconvenient furniture placement, doors getting in the way, blind spots, and residents moving freely. It’s also good because a tracking system in a nursing home reads as altruistic – it’s important to be able to find and care for the elderly as soon as they might need assistance.

The technology works through a combination of facial recognition and color tracking. Colored clothing is a good way to identify people, because it is visible most of the time, but the same color shirt can look different under different lighting. Algorithms compensate for differences in color appearance under different light–they make it so that you can track someone wearing a red shirt as he moves from a dark hall to a brightly lit dining room. Facial recognition is the best way to identify people, but faces are rarely pointed directly at cameras, so it only works about 10 percent of the time.

That’s why it’s important to track both faces and colors at the same time. The process resembles how cell phones pinpoint personal location with different inputs. Signals sent to cell towers provide a constant, rough idea of where the phone user is, and occasionally a GPS double-checks the position and corrects it if need be.

Carnegie Mellon’s program isn’t yet ready for prime time. The researchers used 6 minutes of footage recorded by 15 cameras in a nursing home in 2005 to develop the algorithms and test the system. A live trial is still a long way off, but once the system completes identification in a real-time setting, expect it to move from nursing homes to prisons to casinos and then everywhere.

People wanting to say hidden from this might just turn to facial-recognition-thwarting makeup.