The Second Wave of Gesture-Controlled TVs

Will 2012 be the year everyone starts frantically gesticulating towards their TV? 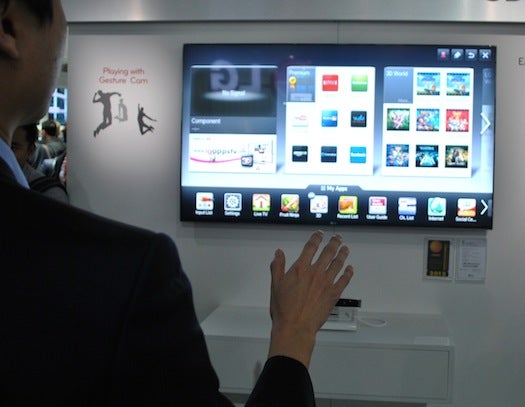 The overwhelming success of Microsoft’s Kinect sensor is just now showing up in grainy photocopied forms–meaning, the ripoffs are emerging. But that’s actually okay with us. Some of them work really well, and do things the Kinect, due to it being a third-party accessory, won’t ever be able to do. We played with new gesture experiments from LG and Samsung, and we’re kind of looking forward to the next year, when we can heave our remote controls out the window forever.

LG is having a pretty great show–they were the first of the show to demonstrate the visual circus that is the 55-inch OLED TV, and they also quietly showed off a Kinect clone that’s actually very impressive. It’s called the LG Gesture Cam at the moment, though it probably won’t be when it’s released sometime in 2012. It’s basically a Kinect-like sensor, but with a single video camera, a depth sensor, and no microphones. It’ll work with any LG smart TV, and be sold separately. The picture at the top of this post shows it in action. 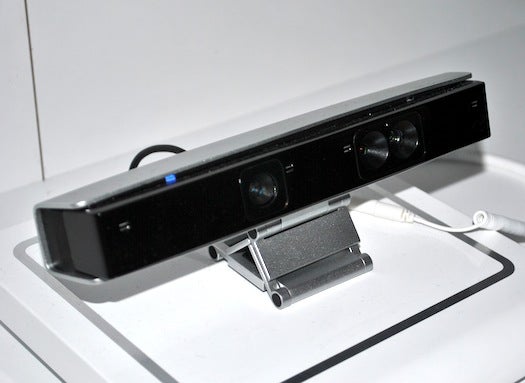 It’s basically a complete remote control replacement. All of the options on-screen have been replaced with larger icons, so you can grab them more easily. And yeah, grab is the right word: instead of a Kinect-style “hover over the item to select it,” the LG system does a “make a fist to select” motion. To move the cursor, you use your open hand, palm out, and to select, you close your hand like you’re grabbing something. That also lets you do stuff like drag and drop, which to my knowledge isn’t available on Kinect (though of course there isn’t all that much of a reason to drag and drop in Kinect).

There are all kinds of motions to perform different actions–pulling down from the top brings up a menu, moving your hand in a circle changes the volume (clockwise for volume up, counterclockwise for down), that kind of thing. It works with a bunch of different apps, as well. Fruit Ninja was in full effect, working almost as fluidly as the version on Kinect. The rep was an expert at it: judging by the way he was using the system, the thing is impressively responsive. But he wouldn’t let me try it, saying that there’s “a bit of a learning curve.” And when an inexperienced rep tried it, he had trouble with the “grab to select” motion. Still, if they can iron the kinks out, I like the LG version a lot. 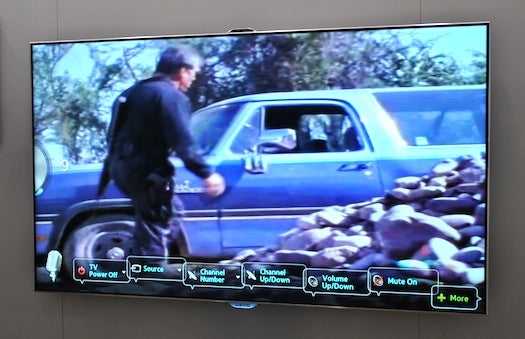 Samsung’s version didn’t even have a provisional name, to my knowledge. And despite the long line to see it, it didn’t work nearly as well as LG’s. But there are a few things that are very cool about Samsung’s version, not least the ability to turn your TV on with your voice. It also seems like a recipe for disaster, if your definition of disaster includes a TV turning on and off. You turn it on by saying “Hi TV!,” which also seems like the universal “home” keyword. “Hi TV!” also opens and closes the menu.

Otherwise, the voice control works mostly like the Kinect’s. Options pop up at the bottom of the screen, and you have to say exactly the phrase indicated–if the correct phrase is “volume up,” you can’t say “increase volume,” or anything like that. But in the tiny enclosed room, silent except for my loud camera shutter, it worked very well.

What didn’t work was the gesture control. It’s called up by waving at the TV, just like on the Kinect, but something wasn’t working and during my demo, the gesture control never worked. But I talked to the rep about how it works, and it’s similar to LG’s. You make the same sort of grabbing motion to select, though it’s less like making a fist and more like the motion you’d make if you want to make a sock puppet talk. It also has a web browser and YouTube viewer and things like that, which can be controlled with voice or gesture.

It’ll also be able to use facial recognition as security, which could be nice for parents. And the camera will also be used for Skype.

The hardware is a little different than LG’s. Rather than an external accessory, it’s just a camera and microphone embedded into the top of the actual TV, and will be found on many of its higher-end, internet-connected smart TVs, including the 55-inch OLED we drooled over. 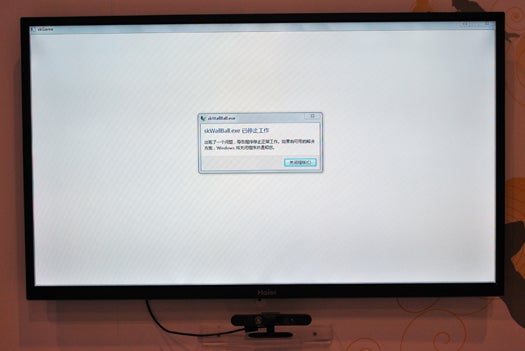 The Haier booth also had a Kinect-like system set up. I tried it for a few minutes, most of which time was spent trying to enter my name, arcade style (and D-A-N is usually a pretty quick selection). Then, once I finally entered my name and got back to the main screen, I tried to select a game, and the whole screen went white except for a Windows error message in Chinese. There was no rep around to ask what happened so I just took a picture and kind of wandered off.