The promise of Microsoft’s Kinect was never simply to allow us to play games sans peripherals, but that one day... 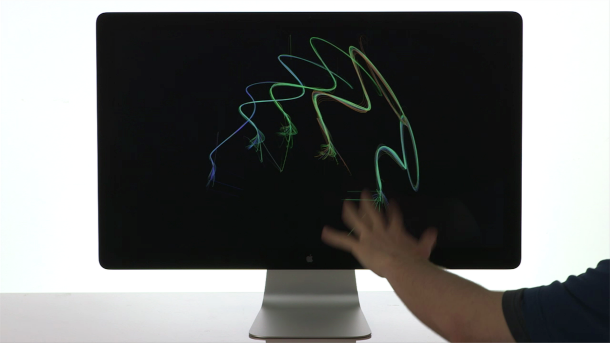 The promise of Microsoft’s Kinect was never simply to allow us to play games sans peripherals, but that one day an entirely new peripheral-free language would arise between us and our machines (many writers might pause here to mention the film Minority Report, but we’re going to refrain). We’re not all the way there yet, but a San Francisco startup is making a sub-$100 attempt at throwing open the door. Leap Motion’s Leap 3D system will allow users to control their computers with hundredth-of-a-millimeter accuracy using touch-free gestural cues.

The system is built on a small USB input device and a lot of sophisticated software, which the company plans to begin retailing next year for $70. For the price, users will be able to manipulate their machines with the kinds of gestures that are becoming more and more ubiquitous thanks to the explosion in touchscreen technologies–things like pinch to zoom, swiping between screens, or scrolling with the flick of a finger. The difference is that the user touches nothing; Leap 3D creates a four-cubic-foot interaction space in front of any computer that is more responsive than either a touchscreen or a mouse (and offers increased capacity for control by adding a Z axis to the touchscreen’s X and Y axes).

In contrast to the Kinect, which Microsoft sought to keep under its own proprietary control, Leap Motion is already reaching out to developers to hack its system. Company execs see applications for their interface upgrade across the board, from engineering and architecture to medicine to simple Web browsing. The company envisions an app store as well, where users can purchase software designed around its system to use on their desktops. The company already has more than 1,000 inquiries from developers–a number it thinks will explode as word gets out about the system.

Eventually the company plans to send out between 15,000 and 20,000 dev kits, with applications being accepted starting now. That’s a lot of developer kits and a lot of potential applications, so keep an eye on this space. Click through to CNET to see a video demonstration of Leap 3D in action.