A Vintage Guide To Enjoying Your Summer Vacation

Whip out your bell bottoms and join us as we reminisce on mail-order vacation homes, lunar module-inspired camping shelters, and more. Happy Memorial Day! 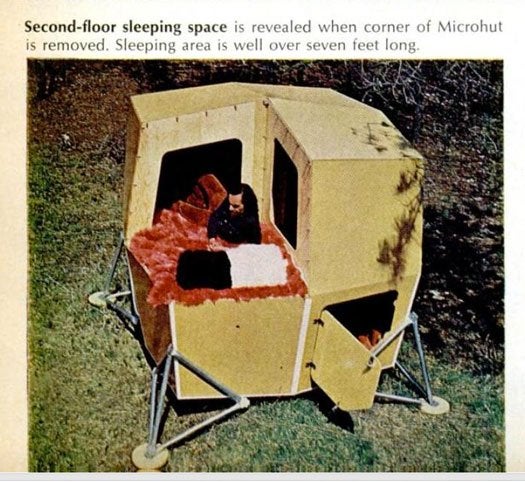 This article was originally published on August 5, 2011.—Eds.

You’d be surprised at how little summer getaways have changed over the past several decades. Sure, people these days can’t bear to leave their smartphones at home, camping mats have gotten increasingly sophisticated, and some cooking pots are even capable of charging various gadgets, but we’re still a long way from camping on the moon instead of in the woods.

Then again, vacations serve as a break from the real world, so perhaps it’s only fitting that we immerse our summers in nostalgia for awhile longer. When reminiscing about our most idyllic getaways, we have a tendency to treasure the ones that took place on beaches without laptops, by poolsides without e-books, and in cabins that weren’t supplied with Roombas and plasma TVs. But if you’re too young to remember those technology-free days, a peek into our archives should give you some idea of what they were like.

People didn’t always haul trailers into the woods. During the 1920s, vacationers had to prepare their little cars for “auto camping” by installing a detachable wooden trunk to the back of the vehicle. A wooden plank on the sides of the car would hold the tent in place.

Our relentless trailer coverage began about twenty years later. In 1946, we taught readers how to build their own compact plywood trailer, which cozily accommodate two adults and two small children. By the early 1970s, you could expect the premium trailers to come with a stove, a sink, and a refrigerator. Vacations in these vehicles were a far cry from the days when we subsisted on campfires and took baths in woodland streams.

Not everyone enjoys spending their summers out in the woods and on the road, though. For those who preferred the great indoors, we suggested mail-order leisure homes that could be assembled in half a day (just in case you wanted to build something slightly more challenging than a tent).

In today’s busy society, it can be hard to justify taking a vacation from work. But according to Dr. C. Ward Crampton, summer getaways are imperative to overall productivity. Using blood pressure as the standard for vitality, Crampton devised a method of measuring how much energy we expend doing various activities. By comparing blood pressure and pulse rates before and after a task, he said, we can calculate how much energy that task cost our body. Doing work between nine in the morning and five in the afternoon costs us ten percent of our overall energy, but even a full night of sleep only recovers about seven percent. As a consequence, we lose three percent of our energy per day so that by Friday, we are far less efficient at work than we were on Monday. Nor are Saturday and Sunday enough to compensate for what we’ve lost. The only way to prevent exhaustion is to take a break. Crampton’s findings on vitality also stated that laughter is worth an hour of sleep as the act of laughing “stimulates the splanchnic veins,” which in turn revitalizes our liver and abdominal veins “by a natural massage.”

Everyone who has ever been camping knows how important it is to prepare their vehicle for long drives, heavy loads, and rugged terrain. Nowadays, we have SUVs and RVs for such endeavors, but back in 1923, campers had less sophisticated vehicles to work with. In this guide to auto camping, we suggested dismounting the tire rack to make room for a home-built wooden trunk held by brass guard rails. You would also need to attach wooden planks to the sides of the car to hold your tent in place. As far as equipment goes, we recommended bringing a shovel, baking pans, ponchos, and a 9x9x7 tent.

In this installment of our “Gus” series, the fictional mechanic advised a young couple on preparing their car for a summer road trip. First, he said, you need to slip into a pair of overalls and check that all your nuts and bolts are screwed in properly. Check the tires, fill the crankcase with fresh oil, and stock up your toolkit with rolls of tire tape in case anything goes wrong. While rookie road trippers commonly assume that you need to install braces to reinforce the frame, Gus said that this step is only necessary if your car is filled to maximum capacity. With just two people in a car designed for five, you needn’t worry about the vehicle being overweight.

Since the beach is the last place you’d want to take a bulky old radio, we recommended building your own portable set to “vacationland.” This little receiver weighed just 7 and a quarter pounds and needed only two batteries. The cabinet was made of pressed composition wood fastened together with cellulose cement and wood screws. A 1/16-inch aluminum chassis, a built-in directional loop antenna, and a homemade vernier dial were used in the receiver. Once you were finished, you’d find that the antenna would receive signals at a minimum when the plane of the loop was pointed at a right angle to the station.

While industrial-sized trailers are handy for cross-country trips, but you’ll probably want something more compact for a short weekend excursion. That’s where this little car comes in. Not only could it accommodate two adults and two children, but building it yourself would cost just $200. In the first installment of this two-part feature, we taught readers how to construct this trailer using just hand tools. The frame was made of waterproof plywood, while screen windows and a roof ventilator kept the inside from getting stuffy. Additional equipment included a 5-gallon gravity water tank with a faucet, a trailer sink, a gas stove, electric fixtures with outlets, and two mattresses. Not bad for a 10′ x 6 1/2′ vehicle!

Is the trunk of your car a little lacking? Try building your own car-top cargo box. This plywood project could support a maximum of 250 pounds on the car roof. Exact dimensions depended on the size of your car. We suggested cutting the sides and ends to size, and curving the ends to the roof, before curving the ribs and rails. The last step would be installing the bottom of the box and adding the railing at the top. We also recommended acquiring hooks and loops from boat shops. To attach the box to your car roof, you would slide it across the top of your car using cloth pads beneath rubber suction cups. Using wax paper between the cups and the roof of your car would also ease removal.

Nothing says “summer vacation” like a dip in the lake. Our home workshop editor wrote up this guide to building a paddle wheel and a platform ball, two flotation devices that could preoccupy your kids for hours on end. The platform ball, which was more challenging to construct than the paddle wheel, was made of exterior-grade DFPA plywood with a foam core.

If camping’s not for you, consider spending your summer vacation in a leisure home you order by mail (note: some assembly required). The dome-shaped house on the left not only required just half a day for assembly, but it was only one of thousands of trendy mail-order vacation cottages. Nowadays, the average person has enough trouble putting together a bookshelf from IKEA, but these models were all the rage back in the 1970s. A second home was a luxury, but homeowners figured that the investment would pay off in the future when land became more valuable. If futuristic homes weren’t your thing, you could also consider one of the more traditional models outlined in this feature. The one-level Designaire, for example, would be delivered to your home in trailer trucks (one wing per truck). The package came with an installed kitchen, electric baseboard heat, and carpeting. A crew of four could assemble it in two days. You could also try the barnlike Frontier I, which was precut but did not include writing and plumbing.

To hype readers up for the summer of 1972, we published an extensive feature on campers suitable for small family cars. Motor homes and van campers might have possessed that “all-in-one” convenience, but nothing was as nostalgic as a good old travel trailer. Our visit to the RVI show in Louisville, KY, hinted at a bright future for pickups furnished with fifth-wheel hitches. The trailers were also about three feet shorter than their predecessors, as owners increasingly preferred hauling them short distances rather than across the country. We were especially excited for the Amerigo F-16, pictured on the left, which was made of lightweight fiberglass and could accommodate four adults. It came with storage bins, a stove, a sink, and a refrigerator. If needed, you could install a portable toilet, a heater, or a 12v current converter.

Trailers and tents not for you? Try the lunar module-inspired Microhut for size. This two-person shelter was designed as part of a camping commune, with nature serving as the village square. Microhuts were made of unframed waterproof Douglas Fir plywood less than half an inch thick, and supported by tetrahedron leg supports. Don’t be deceived by its small size — the Microhut was tall enough for an adult to stand in and to sleep on a horizontal midpoint plane. As the image on the left shows, a small compartment on the bottom of the Microhut served as storage space for chairs (the table was strapped beneath the structure itself).