How It Works: A Tabletop That Sees and Responds to What’s Put On It

Soon, putting a beer on the bar could launch a readout of the brewery’s history, assorted tasting notes, and suggestions... 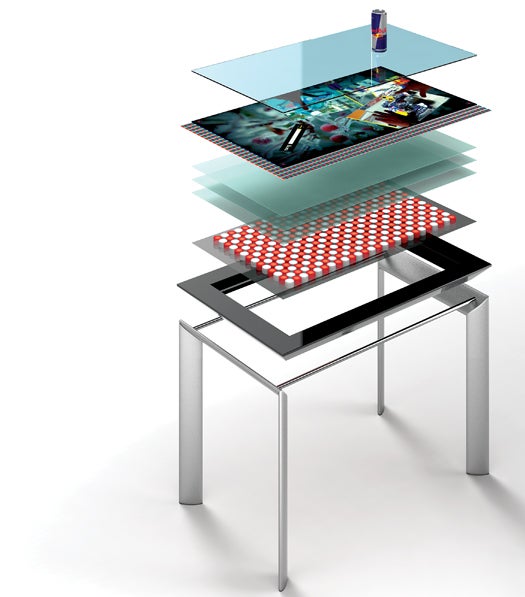 Soon, putting a beer on the bar could launch a readout of the brewery’s history, assorted tasting notes, and suggestions for the best barbecue to accompany your pint. In the Samsung SUR40, Microsoft has introduced a svelte touchscreen table that doesn’t just react to pokes and prods; it sees and identifies what’s on it. This ability allows developers to make apps that cater to products or text cues. Here’s how it works:

Designed for public places such as stores and bars, the SUR40 is topped with a 40-inch sheet of Corning’s scratch- and shatter-resistant Gorilla Glass, which is compressed to be nearly 10 times as strong as other glass.

Each pixel has an infrared sensor that recognizes when its light bounces off an object. Common capacitive touchscreens sense any breaks in an electric field; in the SUR40, every pixel reports for itself. The result is an eight-bit image, from which the table’s computer can pick out shapes and large text, such as product numbers, as long as these identifying marks are facedown.

A 2.9-gigahertz processor translates the sensors’ image and sends related commands to the screen. Plop a Red Bull on the table, and the array sees its narrow shape; the processors can then identify the can and play related videos on the LCD.