In the future, you may be able to play Simon Says with a robot. The Korean Institute of Science and... 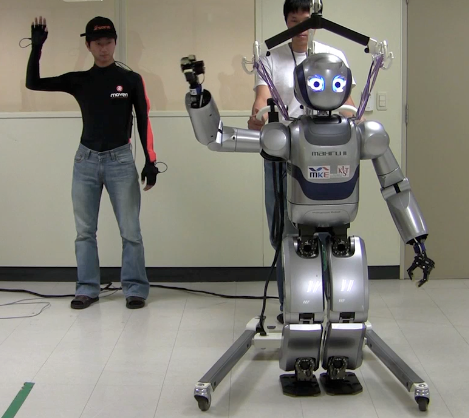 In the future, you may be able to play Simon Says with a robot. The Korean Institute of Science and Technology (KIST) and Samsung Electronics have unveiled Mahru, a bipedal machine that uses motion-capture technology to mimic human movements in real time. When you wave your arms, he waves his arms. If you do the moonwalk, he’ll do his best — at the moment, Mahru’s legs lag a little.

Researchers at KIST’s Cognitive Robotics Center in Seoul developed two techniques for programming and maneuvering Mahru. While the first method requires filming a person with body markers beforehand, the new real-time system, which can be seen in the video below, enables Mahru to mirror the wearer of a motion-capture suit.

In the demonstration above, the wearer’s motions are recorded and transferred to Mahru, who learns them on the spot. Compliant control and force-torque sensors guide the robot’s movements so that they are safe and exact.

According to Mahru’s inventors, he will someday be able to perform manipulation tasks, as well as approach people and shake their hands.

We should note that earlier versions of Mahru can dance and do Taekwondo moves. You can view more videos of those party tricks at the source.