Boogie Board: A Battery-Powered Notepad as Convenient as Pen and Paper

A new electronic notepad may be lifelike, cheap and energy-efficient enough to replace those wasteful paper slips we still use... 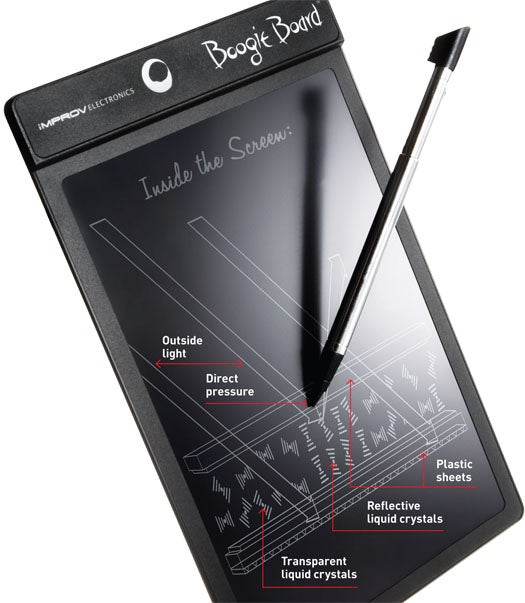 A new electronic notepad may be lifelike, cheap and energy-efficient enough to replace those wasteful paper slips we still use for memos and grocery lists. The four-ounce Boogie Board runs for years on a single watch battery and, thanks to a novel use of the material inside ordinary computer screens, even mimics the feel of putting pen to paper.

The Boogie Board contains liquid crystals, just like an LCD monitor, but it eliminates pixels and the expensive, power-hungry circuitry they require. Instead, you actually push the crystals around with your stylus or fingernail. That physical pushing is electricity-free (the board uses no power at all until you erase it), and it re-creates a pen-like sensation that produces lines of different thicknesses depending on how hard you press. Use it like a whiteboard for now; future versions will add memory that can save your scribbles for later transfer to a computer.

How to Write Without Paper

The Boogie Board sandwiches trillions of liquid crystals—tiny molecules that arrange themselves in spirals—between two plastic sheets. At rest, the screen appears dark because the spirals lie in a way that lets outside light pass through to the black plastic below. But direct pressure forces the spirals to stand upright. Light then bounces off them, naturally creating a bright whitish color, no energy-hogging lamp needed. The image stays put without power, unlike in a traditional LCD, because polymers mixed in with the liquid crystals help keep them in place. To erase, you press a button that sends a charge between the plastic sheets (which are coated with conductive film) and re-scatters the spirals.