CES may be over, but in our post-technalia hangover we’re still discovering a few small wonders that flew under the... 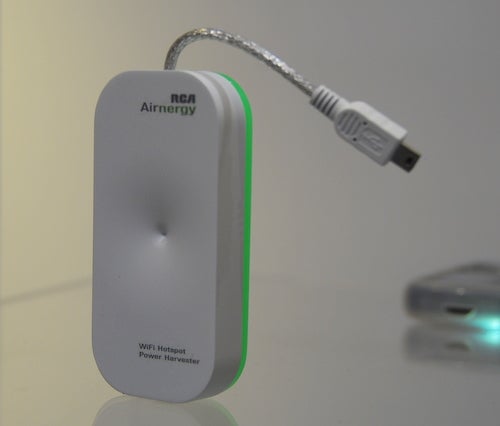 CES may be over, but in our post-technalia hangover we’re still discovering a few small wonders that flew under the radar last week, not least of which is this RCA Airnergy, a small USB device that harvests electrical power from Wi-Fi signals. Anytime the device is in the vicinity of one or more Wi-Fi sources, the Airnergy is charging, converting the wireless antenna signal into DC current that can power myriad small electronics. The idea isn’t novel, but this is the first time anyone has created a commercial product efficient enough to be useful.

The Airnergy unit stores the charge in an internal lithium battery, so you don’t necessarily have to be in a hotspot to recharge, say, your phone. If you have Wi-Fi at home, the Airnergy will automatically charge itself anytime it comes in range of your wireless hub (a good overnight charge should top off the battery; recharge time correlates to its proximity to the Wi-Fi source). You can then tap into that stored charge later when your iPod dies on the subway or your phone starts flagging during an important call.

Now, the limitations: the Airnergy unit that should hit store shelves this year (for about $40) is expected to have a USB connection, meaning it won’t sync with a lot of devices (like the iPod or iPhone) without some kind of connection converter. It’s also an extra device that you have to carry around with you, making it a cumbersome addition your daily tech routine.

But we’re big-picture thinkers here at PopSci, and here’s what you need to know: RCA is also developing Wi-Fi harvesting batteries that should cost roughly the same as the OEM batteries in most devices; that means your phone/iPod/Blackberry/etc. will be able to recharge itself wirelessly anytime you’re near a hotspot without any extra peripheral devices. As cities and networks experiment more and more with Wi-Fi clouds that blanket entire cities, the day may not be too far away when our smartphones download our email, update our Twitter pages and recharge our batteries all from the same signal, all the time, no matter where we go. That’s a brave new world that can’t get here soon enough.